Suppose we have the data matrix $\mathbf{X}$, which is $n$-by-$p$, and the label vector $Y$, which is $n$-by-one. Here, each row of the matrix is an observation, and each column corresponds to a dimension/variable. (assume $n>p$)

And what about the space spanned by the row vectors?

These terms appear in some books on multivariate statistics. Suppose you have $n$ individuals by $p$ quantitative features data matrix. Then you can plot individuals as points in the space where the axes are the features. That will be classic scatterplot, aka variable space plot. We say, the cloud of individuals span the space defined by the axes-features.

Note that if (as often) $n>p$ then, in the second case, only some $p$ dimensions out the $n$ dimensions are nonredundant; that means that you can and may draw the $p$ variable points on $p$-dimensional plot $^1$. Also, by tradition variable points are usually connected with the origin and so they appear as vectors (arrows). We use subject space representation mostly to show relationships between variables, therefore we drop the axes-subjects and depict points as arrows, for convenience.

If features (columns of the data matrix) were centered before drawing the subject space plot then the cosines of the angles between the variable vectors are equal to their Pearson correlations, while the vector lengths are equal to the variables' norms (root sum of squares) or standard deviations (if divided by the df).

Variable space and subject space are two sides of the same coin, they are the same Euclidean analytic space, only presented mirrorlike to each other. They share the same properties, such as the nonzero eigenvalues and eigenvectors. It is possible therefore to plot both subjects and variables side by side as points in the space of the principal axes (or other orthogonal basis) of that analytic space, - this joint plot is called biplot. I don't know exactly what term "data space" mean - if it means something specific then I suppose it is that common analytic space of which subject space and variable space are the two hypostases. 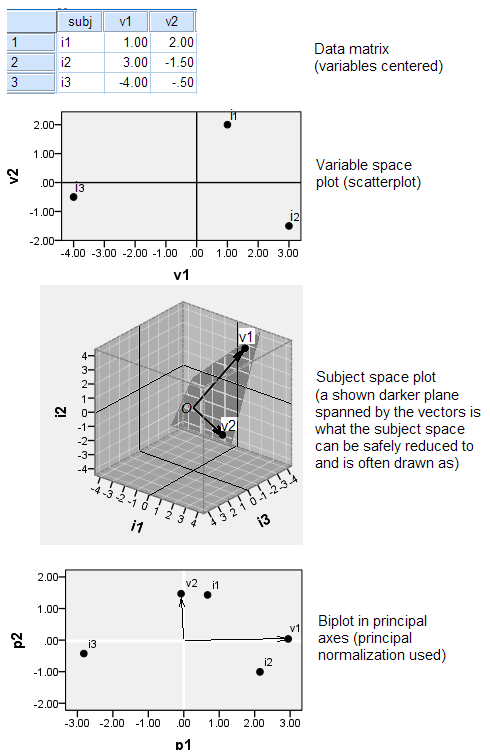 $^1$ Imagine that you have n=5 individuals and p=2 variables and you somehow managed magically to draw the 2 points in the 5-dimensional space. Then you may rotate the subspace defined by any 2 of the axes in such a way that it embeds the 2 points (which thus span that plane from now on); after it, you drop safely the other 3 axes (dimensions) since they have become unnecessary. The position of the two variable points relative each other was preserved.

Not the answer you're looking for? Browse other questions tagged regression multiple-regression terminology geometry biplot or ask your own question.

1248
Making sense of principal component analysis, eigenvectors & eigenvalues
253
What are the differences between Factor Analysis and Principal Component Analysis?
84
How to visualize what canonical correlation analysis does (in comparison to what principal component analysis does)?
52
Why does the correlation coefficient between X and X-Y random variables tend to be 0.7
52
Suppression effect in regression: definition and visual explanation/depiction
36
X and Y are not correlated, but X is significant predictor of Y in multiple regression. What does it mean?
39
How does Factor Analysis explain the covariance while PCA explains the variance?
31
Geometric interpretation of multiple correlation coefficient $R$ and coefficient of determination $R^2$
45
Multiple regression or partial correlation coefficient? And relations between the two
44
PCA and Correspondence analysis in their relation to Biplot
See more linked questions

31
Geometric interpretation of multiple correlation coefficient $R$ and coefficient of determination $R^2$
19
Geometric understanding of PCA in the subject (dual) space
6
Relationship between Linear Projection and OLS Regression
2
How to get the equiangular vector in p dimension linear space? Used in Least angle regression
3
How can a column in a dataset be considered a vector?
4
Linear regression as a projection