Interpretation of the variance of a slope

$\newcommand{\Var}{{\rm Var}}$Simply put, when you perform regression analysis, your analysis is based off of a sample from which there is uncertainty. You could obtain another sample and perform the same regression analysis, but your results will differ slightly. The values or your $\hat\beta$'s will differ a bit for each sample. So $\Var(\hat\beta_2)$ is a measurement of how much variability our estimates would have if we repeated sampling over and over again and fit multiple regression models, each time obtaining a different estimate of $\hat\beta_2$. The $\Var(\hat\beta_2)$ measures how much variability each of the $\hat\beta_2$'s have around their mean.

The variance of $\hat\beta_2$, i.e. the estimator of the true coefficient, tells you how much uncertainty is about the estimated income elasticity of output.

You have very limited amount of data in these kinds of regressions. Say, it's quarterly GDP for a few years. Your sample size is probably tiny, so when you calculate the income elasticity, you better also look at its variance to understand the precision of your estimate. I bet it's miserable.

I'm pretty sure you meant $\hat\beta_2$, not $\beta_2$ which is a constant in OLS, as @Xi'an pointed out. Now, if we want to be pedantic, then in reality $\beta_2$ doesn't have to be and is not a constant. It certainly depends on other things, but in the framework of this model, it is a constant.

Even in the idealized, theoretical population there is a spread of the $y$ measurements, which is assumed to follow a normal distribution around the fitted regression line, expressed as $\varepsilon$ in the equation in your original post. The variance of $\varepsilon$ is constant under the Gauss-Markov assumption (homoskadesticity), and expressed as $Var(\varepsilon) = \sigma^2$.

At a graphical level, and with some quick lines of code, we can draw 10,000 samples, each one of 100 observations from a known normal distribution, $N(10,5)$, for example, and estimate the spread of the slope of the regression lines. I omitted the intercept.

Here are the plots, which I think illustrate the answer to your question: 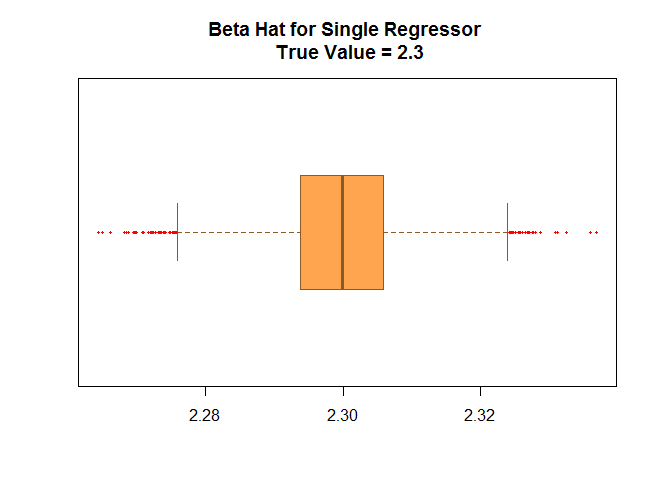 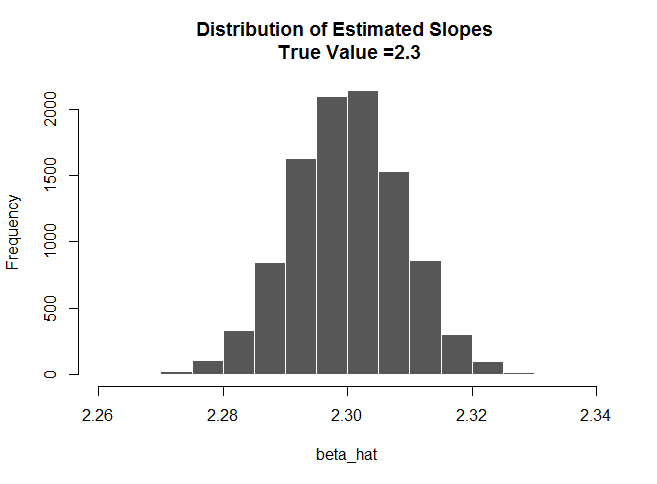 The code is here

Not the answer you're looking for? Browse other questions tagged regression interpretation regression-coefficients or ask your own question.