I'm doing an analysis to examine if my data points are clustered along a polar axis (the cycle of a repeated playback sound followed by silence). I'm interested in:

For #2, I am considering doing bootstrapped estimates of the directional mean from my resampled data. Then using the distribution of the bootstrapped means to construct a 95% confidence interval, where the 95% of the points closest to the mean from my actual data are used to define the CI.

Essentially, if the CI does not overlap the playback period of my playback cycle, I can assume that there is a tendency to avoid the playback.

I feel that my approach may not be 100% correct and that there might already be better established methods to get what I'm looking for, but I've had a lot of trouble finding examples of circular statistics which are relevant to my question.

Any ideas? I'd also be super happy to see any references for studies which have applied circular statistics to similar questions!

So this question was in the context of playback experiments on singing birds. An area of ecology where there aren't really good statistical templates to follow in the literature (please let me know if I'm wrong here, and missed some good papers).

We had an $x$ minute track played on a loop, where the initial proportion of the cycle $p$ was some period of noise (0.5 for example), followed by silence for the remainder of the track.

In my proposed approach, computing the mean singing direction via bootstrapped CI's had an issue. In this formualtion, I did not include the expected observations that would happen under a null hypothesis (the bird is singing randomly with no avoidance behaviour). Hence, I could not work this into a null hypothsis rejection test.

Additionally, I now believe that using the bootstrapped values closest to the observed mean for the calculation of my CI's didn't really make much statistical sense.

As I had difficulty in finding a way to formulate a testable null hypothesis based around the mean singing direction, I oped to instead focus on the expected vs observed singing overlap with the avoidance region of the playback track.

This analysis is now done and published (paper here, section 2.4.2 and figure 4)

Focusing on proportion of singing overlap, as opposed to mean singing direction: Each song has a start and end time, so songs are comprised of their start time, and duration:

For more context, below I've pasted a figure from the paper, so you can see what our data looked like. 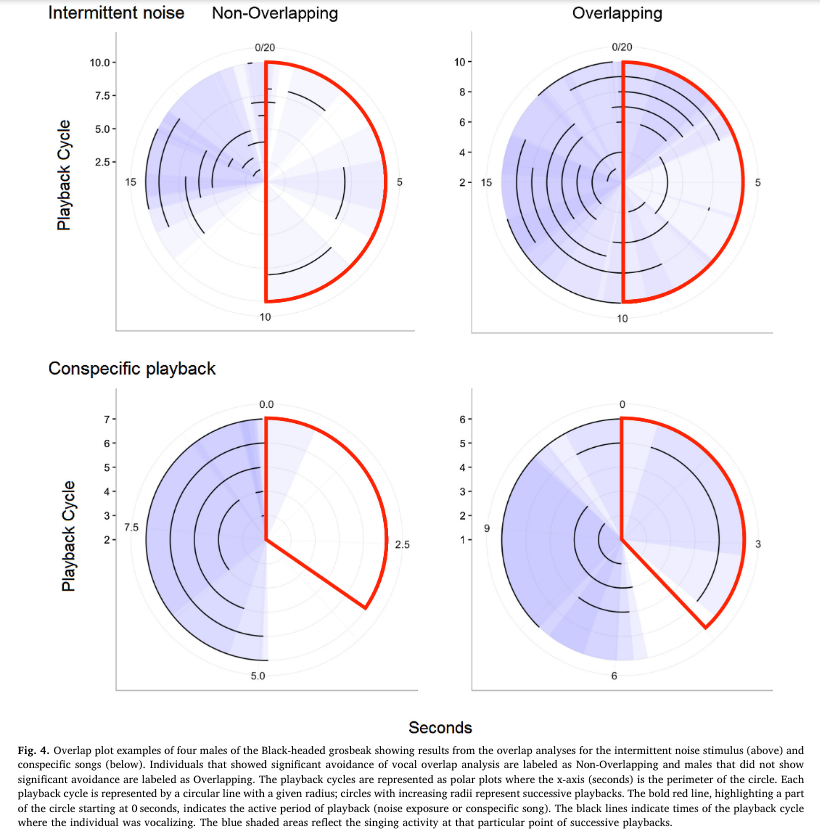 Not the answer you're looking for? Browse other questions tagged confidence-interval modeling bootstrap circular-statistics or ask your own question.