Classifying time-series similarity - what variable should I train on?

I have ~10,000 time series, each with 65 time points. I'm interested in classifying each pair of time series as "similar" or "not similar". Here's an example of two similar (left) and not similar time series (right): 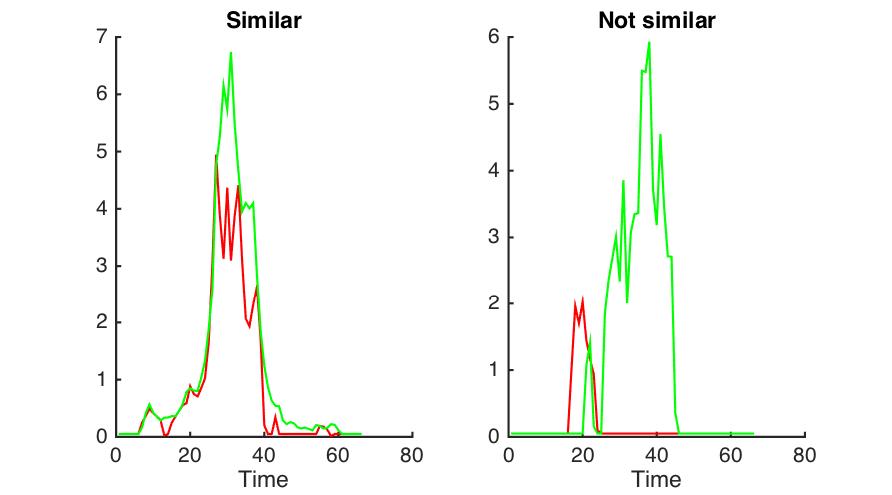 I know a priori whether some pairs should be "similar" or not, so I have class labels and can train a classifier. The inputs I'm using for the classifier are i) correlation coefficient between the two time series and ii) Euclidean distance.

My question is, what other statistics measure similarity of time series like this and could be used as input for the classifier? Dynamic time warping? I'm interested in calculating a number of measures for input into the classifier. I'd be really grateful if anyone can suggest others.

Edit: Here are more examples of "similar" (top) and "not similar" pairs (bottom). 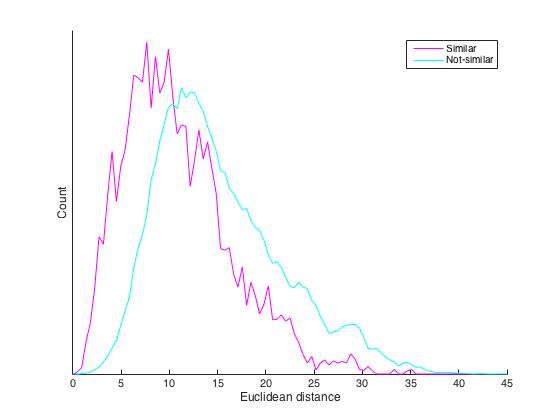 is the amplitude important? If so, try the area under the curves as a feature.

if not, you need to z-normalize the data.

This paper lists many many possible time series features http://arxiv.org/pdf/1401.3531.pdf

I could help you more, if you showed many more examples.

Based on the examples you show, simple Euclidean distance will get you 100% accuracy. This appears to be VERY easy.

Not the answer you're looking for? Browse other questions tagged time-series correlation classification naive-bayes similarities or ask your own question.

17
Can someone please explain dynamic time warping for determining time series similarity?
6
Does it make sense to use dynamic time warping when clustering time series that all have the same length and sampling interval?
2
Log-Transform/Pre-Processing Time Series before Similarity Matching
1
Comparing multidimensional time series with possibly non-informative dimensions
6
Suitable distance metric for time-series clustering with respect to location of shapes
2
Classifying compositional vectors of time series