I have submitted a paper to a journal reporting a non-significant finding. One of the reviewers has asked me to include a power analysis on my data to work out how big a sample size I would need to adequately power a study to test a raw mean difference of 1500 for significance. Basically he wants me to "prove" my study was not underpowered. Could someone offer me advice on how to do this?

I ran an unpaired t-test where:

Power analyses exploit an equation with four variables ($\alpha$, power, $N$, and the effect size). When you solve for power by stipulating the others, it is called "post hoc" power analysis. People often use post hoc power analysis to determine the power they had to detect the effect observed in their study after finding a non-significant result, and use the low power to justify why their result was non-significant and their theory might still be right. As @rvl points out in the comments, this involves "circular logic and [is] an empty exercise". However, that is not what you are doing here. Moreover, 'post hoc' power analysis can be a legitimate exercise: for example, I have had cases where a researcher knew they would only be able to get a certain number of patients with a rare disease and wanted to know the power they would be able to achieve to detect a given clinically significant effect. Although that isn't 'post hoc' in the sense of after the fact, it is called "post hoc" power analysis because it solves for power as a function of the other three.

I will go out on a limb and assume your $\alpha$ was $.05$. Clearly, $N = 9$. We can determine the effect size by calculating the pooled SD, and then the standardized mean difference that corresponds to a raw mean difference of $1500$ and the computed pooled SD.

Having determined the effect size you want to use, you need some software to do the power analysis calculation for you. (It involves numerical approximations that you cannot do by hand.) A free and convenient application is G*Power. 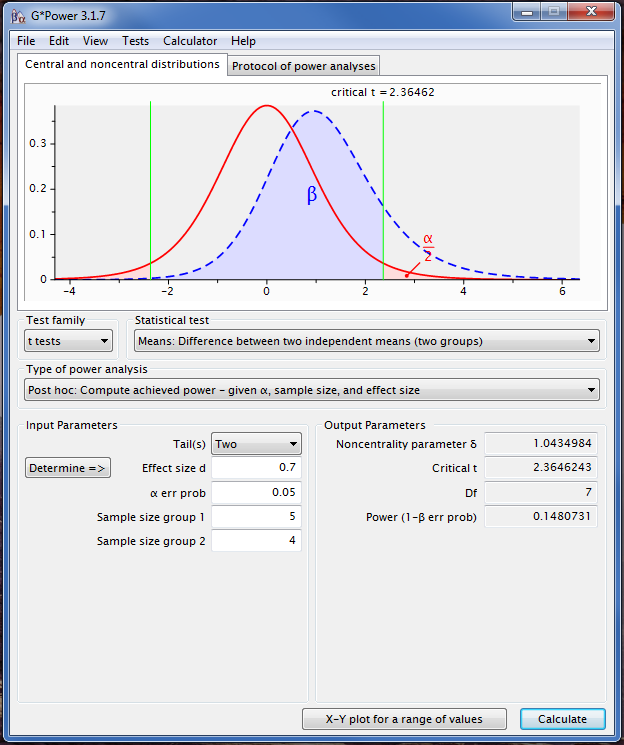 Please, do not include this in your paper. The post-hoc power analysis is not going to tell you anything, and people reading your paper will think that you do not know what you are doing!

Power analyses can only be performed before you collect your data. They are very useful for e.g. determining the number of samples you need to collect in order to observe a particular effect size. After the study, a "post hoc" analysis is useless, since both your effect and sample sizes are constants. Some people argue that they can be used to determine the required sample size of a hypothetical future study, but the utility of this is debated (since it only makes sense if the study is actually performed). But the reviewer did not ask for this, he/she asked for you to prove that your study was underpowered, something that you can not do using a post-hoc power analysis.

A quick web search gave me the following posts/papers demoting post-hoc power. Please read them and refer your reviewer to them. Clearly, he/she does not understand what he/she is asking you to do.

Not the answer you're looking for? Browse other questions tagged statistical-power post-hoc or ask your own question.

9
Report power if result is statistically significant
12
When (if ever) is it a good idea to do a post hoc power analysis?
2
Post hoc power analysis for multilevel regression analysis
3
Is it uninformative to present power in meta-analyses after the fact?
0
How could one derive power indicators for omnibus tests?