Scaling data that are on different orders of magnitude for plotting

Looking at the following dataset:

I've been asked to plot this on a graph, using the Date has the X-Axis and the rest of the data on the Y-Axis. The problem is that the scale of the data is dramatically different. where Visits are in the thousands and Orders Created are in the low tens, the data doesn't plot well on a graph.

I was wondering what a statistician would do in this scenario, I could divide the the Visits by a 1000 and then put in the description (Visits (K)), but then I start to have the same problem with Carts Created, as they are in the hundreds and everything else is in the low tens.

What kind of thing is done in this scenario?

It isn't unreasonable at the onset to plot the line charts as a series of small multiples, with different scales for the Y axis but with the X axis (dates) aligned. 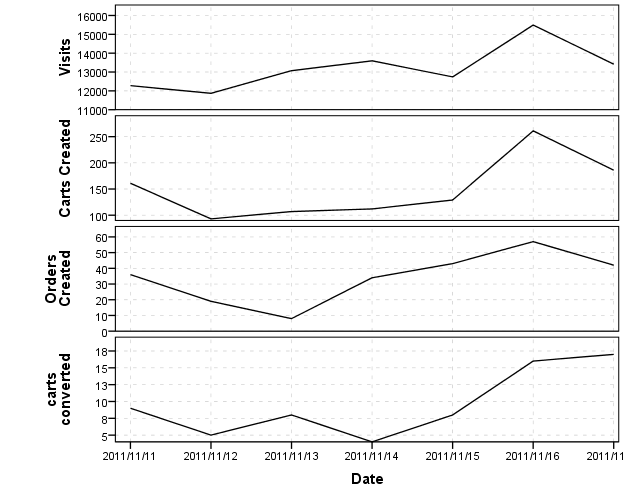 I think this is a good start, as it allows one to examine the raw data, and allows for comparison of trends between different line charts. IMO you should look at the raw data first, then think about conversions or ways to normalize the charts to be comparable after you examine the raw data.

Making percentages is a way to bring the series closer to a common scale, but even then placing all of the lines on one chart (as below) is still difficult to visualize the series effectively. The level and variation of the orders created and carts converted series dwarfs that of the other series. You can't see any variation in the carts created series on this scale (and I suspect that is the one you are most interested in). 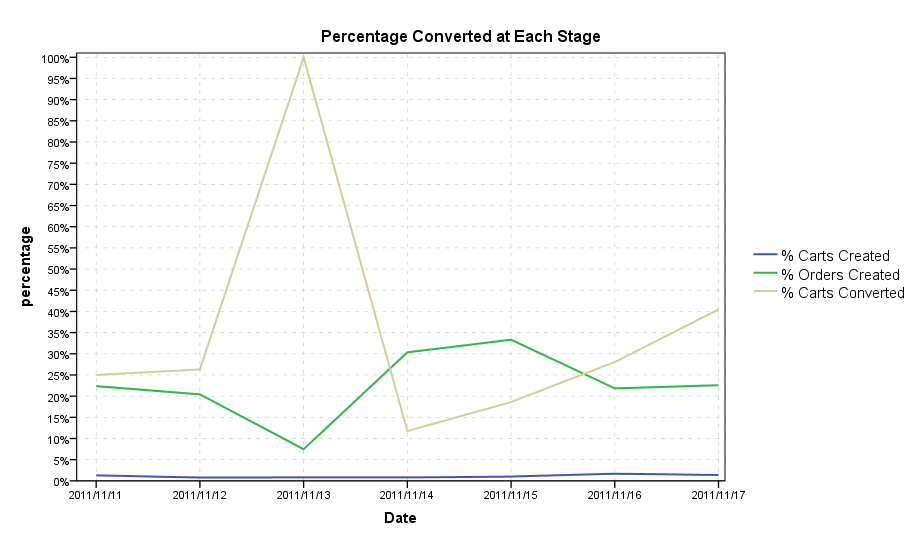 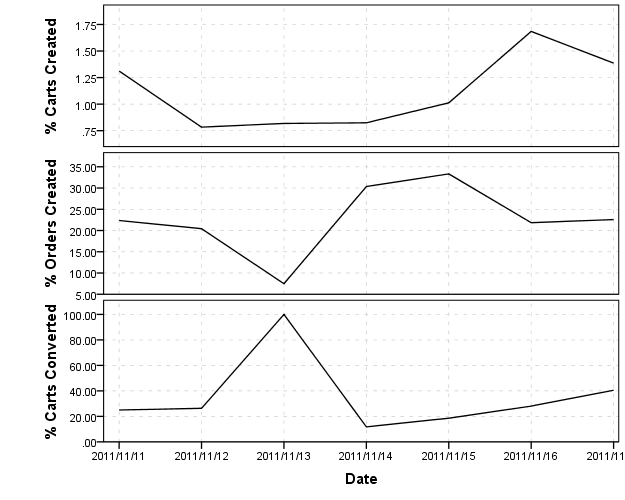 With these graphics, there doesn't appear to me to be any real meaningful correlation to me between the series, but you do have plenty of interesting variation within each series (especially the proportion converted). What's up with 2011-11-13? You had a much lower proportion of order's created but every one of the order's created was a converted cart. Did you have any other interventions which might explain trends in either site visits or proportion or percentage carts created?

This is all just exploratory data analysis, and to take any more steps I would need more insight into the data (I hope this is a good start though). You could normalize the line charts in other ways to be able to plot them on a comparable scale, but that is a difficult task, and I think can be done as effectively choosing arbitrary scales based what is informative given the data as opposed to choosing some default normalization schemes. Another interesting application of viewing many line graphs simultaneously is horizon graphs, but that is more for viewing many different line charts at once.

You can have 2 separate y-axis, Visits (k) and Carts Created in one, the other 2 in another (or whichever way fits your purpose).

This is definitely not an elegant method, but I remember doing it years ago when I just wanted to compare trends across time.

You can just plot the percentage change across time if it suits your purpose.

In the end I decided to normalise the data by dividing each value by the maximum value and then multiplying by 100.

That would be my approach too - - to adjust the different dimensions to the same scale by dividing by X but I would use avg value, not max or min value. The reason is -- as you add data over time, your max or min will likely change, and then what was 100% in the last chart is something else this time - the chart isn't as easily reconcilable to prior charts - - if you use avg then the changes are not as drastic.

1
At what scale to plot variables in different units?

12
How do I reduce the number of data points in a series?
8
Are there references for plotting binary time series?
5
Displaying fine variation across multiple orders of magnitude
4
How to plot data when their values differ by orders of magnitude?
2
What are data visualization types that are exclusive for scientific fields?
0
normalizing and scaling are different?