What is the most appropriate way to transform proportions when they are an independent variable?

I thought I understood this issue, but now I'm not as sure and I'd like to check with others before I proceed.

I have two variables, X and Y. Y is a ratio, and it is not bounded by 0 and 1 and is generally normally distributed. X is a proportion, and it is bounded by 0 and 1 (it runs from 0.0 to 0.6). When I run a linear regression of Y ~ X and I find out that X and Y are significantly linearly related. So far, so good.

I have a couple of related questions from here. First, my X variable takes four values: 0, 0.2, 0.4, and 0.6. When I log- or square-root-transform these data, the spacing between these values distorts so that the 0 values are much further away from all the others. For lack of a better way of asking, is this what I want? I assume it isn't, because I get very different results depending on the level of distortion I accept. If this isn't what I want, how should I avoid it?

Second, to log-transform these data, I have to add some amount to each X value because you can't take the log of 0. When I add a very small amount, say 0.001, I get very substantial distortion. When I add a larger amount, say 1, I get very little distortion. Is there a "correct" amount to add to an X variable? Or is it inappropriate to add anything to an X variable in lieu of choosing an alternative transformation (e.g. cube-root) or model (e.g. logistic regression)?

What little I've been able to find out there on this issue leaves me feeling like I should tread carefully. For fellow R users, this code would create some data with a sort of similar structure as mine.

The main question about transforming proportions (I'll use $x$ as symbol, similarly but not identically to your notation) allows some general comments.

In what follows I take it that the main motive for transforming proportions that are covariates (predictors, independent variables) is to improve the approximation to linearity of relationship, or if in exploratory mode to get a clearer idea graphically of the shape or indeed existence of any relationship. As usual whether a covariate is (e.g.) approximately normally distributed is not crucial as such. (Proportions are a not too distant relative of indicator variables with values $0, 1$ which can never be distributed normally, and proportions too are necessarily bounded.)

If the proportions can attain exact zeros or exact ones, it is essential that a transformation be defined for those limits, which clearly rules out $\log x$, as $\log 0$ is indeterminate. Beyond that a particular shape ideally requires some substantive (scientific, practical) justification, but lacking that it follows from some simple analysis that $\log (x + c)$ is highly sensitive to the value of $c$, as you hint.

So the lower bound is stretched outwards with smaller and smaller added constants $c$, while the upper limit remains about the same. Such transformations thus can stretch the lower part of the range exceedingly and even create outliers from very small values at or near $0$.

Simply, people suggesting this presumably imagine that $\log (x + c)$ (now to any base you like) should behave very similarly to $\log x$ for small $c$, which is clearly true for large $x$, but not at all true for small $x$. Otherwise put, the steeper and steeper slope of $\log x$ as a function of $x$ as $x \downarrow 0$ can bite here very hard.

It seems preferable to focus on transformations that vary more gradually near $x = 0$ and (for other, but related, reasons) also near $x = 1$.

Square roots and cube roots and other powers $x^p$ are perfectly well defined for $x = 0, 1$ and often help when there is a need to stretch values near $0$. But these transformations are well known and I focus here more on another possibility.

The family of folded powers popularised by J.W. Tukey (Exploratory Data Analysis, Reading, MA: Addison-Wesley, 1977) is one possibility, and is $x^p - (1 - x)^p$. Although there is no compulsion to choose powers that allow simple evocative names, the choices $p = 1/2$ (folded root) and $p = 1/3$ (folded cube root) seem the most useful members of this family.

Folded powers, including now the logit, treat the extreme cases near $0$ and $1$ skew-symmetrically and plot as inverse sigmoid curves (some graphs below) mixing additive and multiplicative behaviour, echoing frequent qualitative (if not physical, biological, economic, whatever) facts for the underlying phenomenon that

This is perhaps easiest to think about when some underlying dynamics is imagined: the increasing fraction of say literate people needs a big push to get going, speeds up and then slows down as it approaches the asymptote of universal literacy. So the curve in time can resemble an increasing or decreasing logistic. The fact that $0$ and $1$ proportions are approached more or more slowly is naturally one of several motivations for logit and similar models for proportional responses; although we are here focusing on proportional covariates, sigmoids can be useful here too.

Folded powers such as the folded root or cube root are not as strongly sigmoid as the logit, but a valuable merit here is their being directly and easily defined without fudges, kludges or nudges for $x = 0, 1$.

Turning to your fake but seemingly realistic dataset (which I imported into my own favourite software, but analysis is simple in anything decent), it turns out that none of these transformations really helps at all. But graphing the data gives a clear warning that even $\log(x + 0.001)$ is a mighty strong transformation, as can be seen also by plotting it directly.

The two main points I wish to make are that

At the same time, other possibilities are far from exhausted. (Notably, I didn't try square root or cube root, and stress that in many other problems those could be obvious and serious candidates.)

The first set of graphs simply shows some candidate transformations for proportions that can attain both $0$ and $1$. (I used natural logarithms, but shapes don't depend on the base chosen).

The second set of graphs shows no transformation helping much for the example data. (For comparison, a plain regression on the original data yields $R^2 = 3.7$%, RMSE $= 0.994$.) 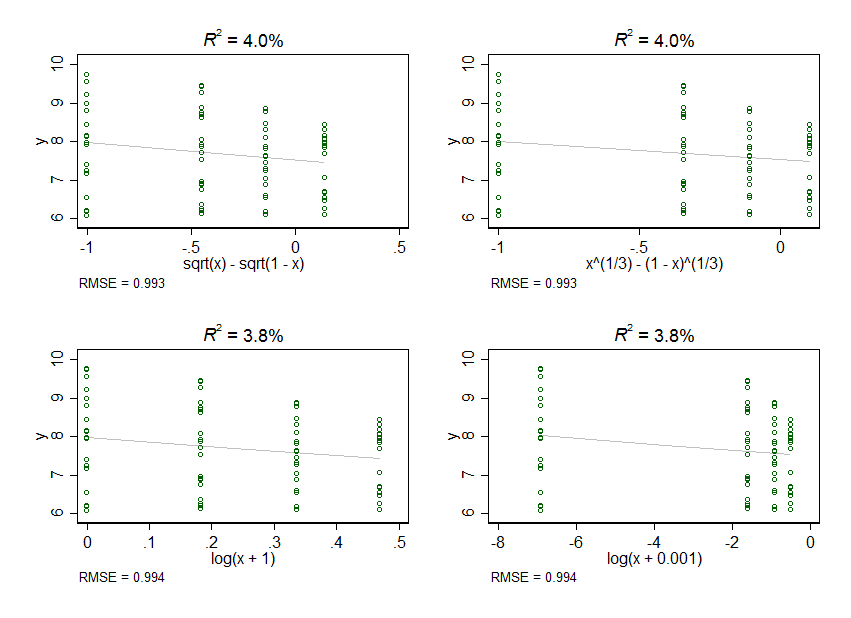 EDIT: The original data could be plotted here because the OP briefly posted data, but then later removed them.

Transforming proportion data: when arcsin square root is not enough

Not the answer you're looking for? Browse other questions tagged r regression data-transformation nonlinear-regression proportion or ask your own question.

22
Transforming proportion data: when arcsin square root is not enough
3
Appropriate data transformation
4
Regression: Scatterplot with low R squared and high p-values
1
Working with ratios: standardizing problem
2
Plot a highly skewed dataset
2
How to back transform a folded root?
1
How can I interpret the coefficient of a logit transformed explanatory variable in linear regression?
2
Forecasting daily data with zeros in Python
1
Percentage difference of percentages
1
Transformation of specific data
See more linked questions

4
Regression when the response is a proportion that can be 0 or 1
3
Nonlinear regression: best transformation when getting very different parameter estimates
1
Transforming a relationship from quadratic to linear
5
Linear mixed effects models: what to do when the residual QQ-plot looks non-normal?
2
Multiple regression - how to deal with mixed linear and non-linear variables
1
Transformation of data with zero and R squared
4
What is the most appropriate transformation method for performing analyses on species composition data?
6
Fitting a Regression Model to log-log distributed data