How to understand the geometric intuition of the inner workings of neural networks?

I've been studying the theory behind ANNs lately and I wanted to understand the 'magic' behind their capability of non-linear multi-class classification. This led me to this website which does a good job of explaining geometrically how this approximation is achieved.

Here's how I understood it (in 3D): The hidden layers can be thought of as outputting 3D step functions (or tower functions) that look like this: 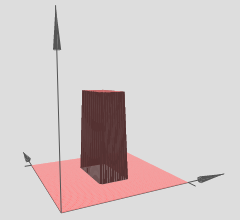 The author goes to state that multiple such towers can be used to approximate arbitrary functions, for example: 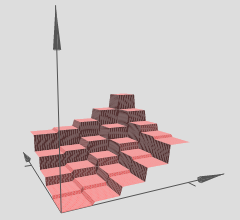 This seems to make sense, however the author's construction is rather contrived to provide some intuition behind the concept.

However, how exactly can this be validated given an arbitrary ANN? Here is what I wish to know/understand:

Here's what I have in mind that I think could help:

Is this construction correct? Would this work? How do I go about doing this? I'm not yet adept with back-propagation to implement this by myself and am looking for more clarity and direction in this regard - existing examples showing this would be ideal.

There are two great recent articles on some of the geometric properties of deep neural networks with piecewise linear nonlinearities (which would include the ReLU activation):

They provide some badly needed theory and rigor when it comes to neural networks.

Their analysis centers around the idea that:

deep networks are able to separate their input space into exponentially more linear response regions than their shallow counterparts, despite using the same number of computational units.

Thus we may interpret deep neural networks with piecewise linear activations as partitioning the input space into a bunch of regions, and over each region is some linear hypersurface.

In the graphic you have referenced, notice that the various (x,y)-regions have linear hypersurfaces over them (seemingly either slanted planes or flat planes). So we see the hypothesis from the above two articles in action in your referenced graphics.

Furthermore they state (emphasis from the co-authors):

deep networks are able to identify an exponential number of input neighborhoods by mapping them to a common output of some intermediary hidden layer. The computations carried out on the activations of this intermediary layer are replicated many times, once in each of the identified neighborhoods. This allows the networks to compute very complex looking functions even when they are defined with relatively few parameters.

Basically this is the mechanism that allows deep networks to have incredibly robust and diverse feature representations despite having a fewer number of parameters than their shallow counterparts. In particular, the deep neural networks can learn an exponential number of these linear regions. Take for example, Theorem 8 from the first referenced paper, which states:

This is again for deep neural networks with piecewise linear activations, like ReLUs for example. If you used sigmoid-like activations, you would have smoother sinusoidal looking hypersurfaces. A lot of researchers now use ReLUs or some variation of ReLUs (leaky ReLUs, PReLUs, ELUs, RReLUs, the list goes on) because their piecewise linear structure allows for better gradient backpropagation vs the sigmoidal-units which can saturate (have very flat/asymptotic regions) and effectively kill gradients.

This exponentiality result is crucial, otherwise the piecewise linearity might not be able to efficiently represent the types of nonlinear functions we must learn when it comes to computer vision or other hard machine learning tasks. However, we do have this exponentiality result and therefore these deep networks can (in theory) learn all sorts of nonlinearities by approximating them with a huge number of linear regions.

If you want to just test your intuition, there's a lot of great deep learning packages available these days: Theano (Lasagne, No Learn and Keras built on top of it), TensorFlow, a bunch of others I'm sure I'm leaving out. These deep learning packages will compute the backpropagation for you. However, for a smaller scale problem like the one you mentioned it really is a good idea to code up the backpropagation yourself, just to do it once, and learn how to gradient check it. But like I said, if you just want to try it out and visualize it, you can get started pretty quickly with these deep learning packages.

If one is able to properly train the network (we use enough data points, initialize it properly, training goes well, this is its own whole other issue to be frank), then one way to visualize what our network has learned, in this case, a hypersurface, is to just graph our hypersurface over an xy-mesh or grid and visualize it.

If the above intuition is correct, then using deep nets with ReLUs, our deep net will have learned an exponential number of regions, each region having its own linear hypersurface. Of course, the whole point is that because we have exponentially many, the linear approximations can become so fine and we do not perceive the jagged-ness of it all, given that we used a deep/large enough network.

Not the answer you're looking for? Browse other questions tagged machine-learning neural-networks approximation intuition function or ask your own question.

1
Interpretation of a deep neural network
6
Does number of layers in neural network corresponds to degree of the approximation function?