I have a small data set of 14 separate times to complete a task. However I am having difficulty finding an appropriate graph to use to graph the data. If the sample was larger I would use a box plot or histogram but I'm not sure if it would be appropriate to use in this case when the sample is so small.

I think the cardinal principle here is that you can and should show all the individual values. Even if the detail is not obviously interesting or useful, there is no reason not to show it, or to oblige the reader to decode (say) a histogram in which the bars might represent just one or two values.

I offer here a small composite. Top left is a dot or strip plot (at least twenty other names have been used for the same idea) presented horizontally and top right the same idea presented vertically. Instances of the same value are matched by stacking.

At bottom is a quantile-box plot, in Parzen's sense, in which the tacit horizontal scale is cumulative probability (plotting position, in a common jargon) and the conventional median-and-quartiles box can be drawn such that (in principle) half the values are inside the box, as always advertised, and half the values outside. The extra horizontal line here represents the mean. Some people add means to box plots as an extra point or marker symbol; I find that can clash with showing the data themselves, and I prefer an extra line. If the line for the median and the line for the mean appeared to coincide, you would need to think what to do. Almost always the mean and median are discernibly different.

Arguably it is standard to make the units of measurement explicit on the graph, but I don't see what they are. 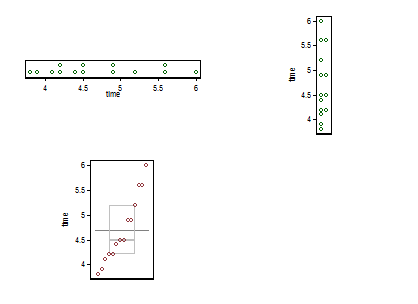 (I deliberately pushed an extra point here, which is that graphs can be very small but still informative. In practice, I wouldn't make them quite this small.)

How can I measure difference between non-parametric data with many zeros?

How to use boxplots to find the point where values are more likely to come from different conditions?

How do I get which experiment is doing better using the Mann-Whitney U Test?

The main point of these threads is not just to answer the immediate question, but to touch on closely similar questions that might interest others.

Some other graph designs in other answers here show identifiers, agnostically labelled 1 ... 14 in the absence of other detail. Supposing that these and other identifiers were of use in interpretation, a simple design to show them is a (Cleveland) dot chart. Here are two among several possibilities, in which identifier order is respected literally (left) and in which the values are sorted (right). There is plenty of room for longer labels if needed.

An advantage of this design over bar charts is that the response or outcome axis may start at a value not zero if that seems a better choice.

Rotating the charts so that the response axis is vertical may be imagined easily too. 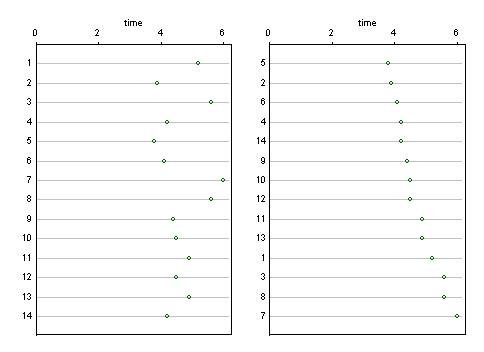 @Nick Cox has already given some good examples, two other options I use somewhat frequently are the box plot with points overlayed, or jittered slightly, 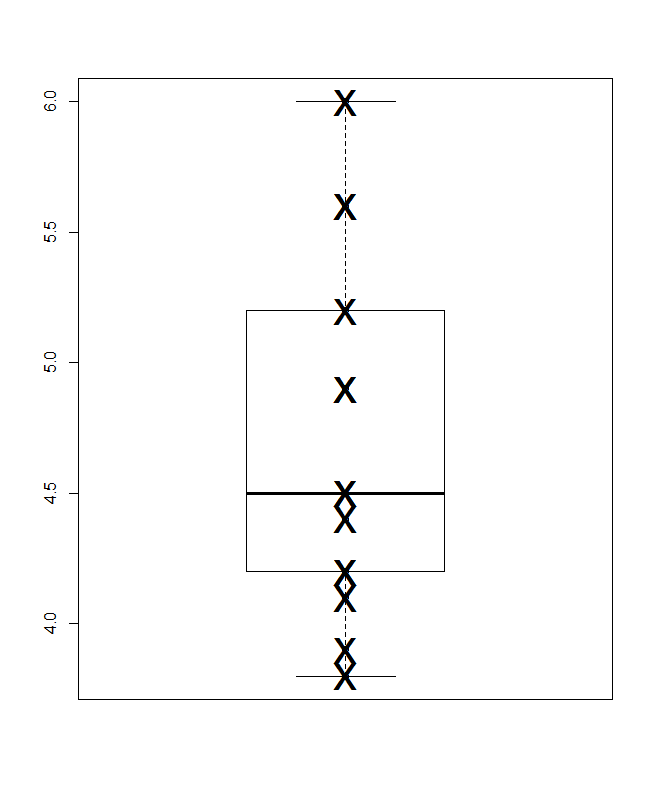 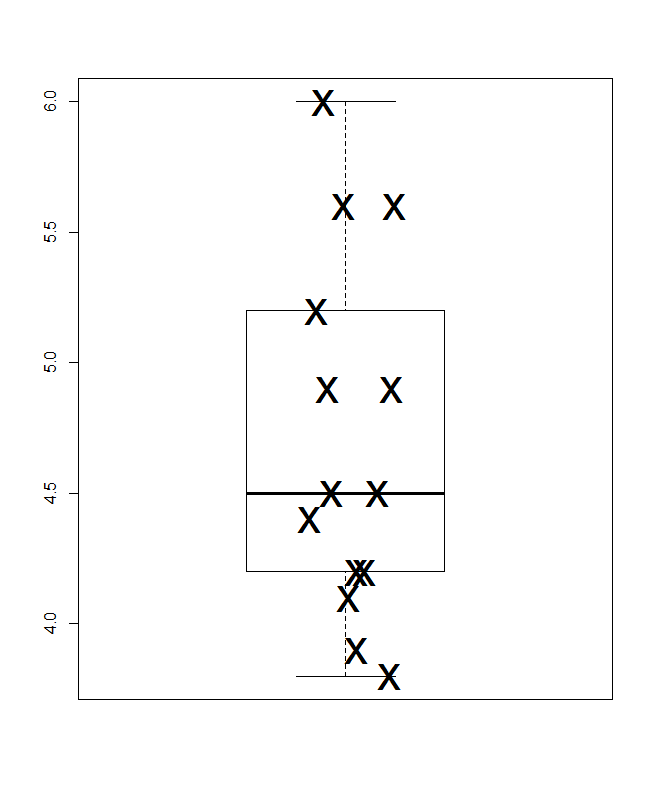 EDIT: You could also use a violin plot if you so desired 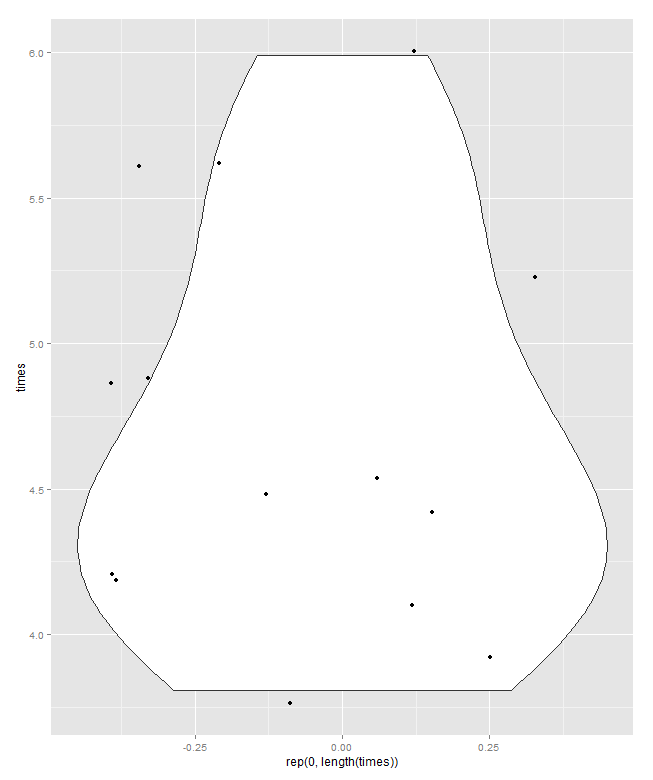 Your question reminded me of the technique described in this blog post. Its about the visualization of discrete events.

The core trick is to plot the time before an event x the time after an event. 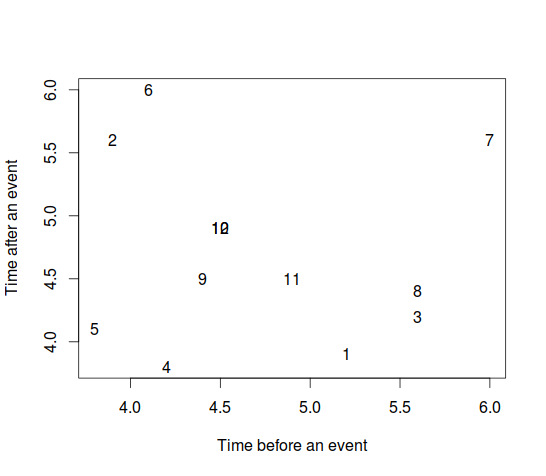 This might be by chance, but to top middle area contains no data. So there is some structure visible.

The quick and dirty R code.

Another idea, since you're using time.

A racetrack plot - a barplot with polar coordinates - gives the same effect like a stopwatch: 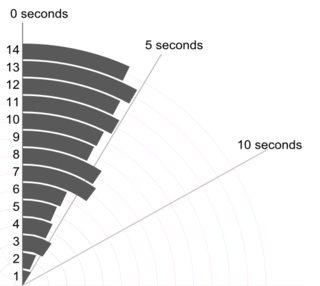 Ideally the observation labels would be superimposed on the bars or at least on the other end. Right now the viewer has the extra strain of keeping track of which observation is which (up/down) when making any comparisons.

Not the answer you're looking for? Browse other questions tagged data-visualization descriptive-statistics small-sample or ask your own question.

11
How to visualize independent two sample t-test?
7
How to use boxplots to find the point where values are more likely to come from different conditions?
2
Boxplot interpretation
3
How can I measure difference between non-parametric data with many zeros?
0
How do I get which experiment is doing better using the Mann-Whitney U Test?

2
Graphing low-end prices of goods in a market over time
8
Multiple regression with small data sets
5
Student's t vs Mann-Whitney U for small equal samples
11
Is randomization reliable with small samples?
1
small sample size, large number of variables (most categorical) - how to proceed?
0
Which stats should I use when samples are uneven and data are not normally distributed?