I have read about what censoring is and how it needs to be accounted for in survival analysis but I would like to hear a less mathematical definition of it and a more intuitive definition (pictures would be great!). Can anyone provide me with an explanation of 1) censoring and 2) how it effects things like Kaplan-Meier curves and Cox regression?

Censoring is often described in comparison with truncation. Nice description of the two processes is provided by Gelman et al (2005, p. 235):

Below you can find example of standard normal distribution that is censored at point $2.0$ (middle) or truncated at $2.0$ (right). If sample is truncated we have no data beyond the truncation point, with censored sample values above the truncation point are "rounded" to the boundary value, so they are over-represented in your sample.

Intuitive example of censoring is that you ask your respondents about their age, but record it only up to some value and all the ages above this value, say 60 years, are recorded as "60+". This leads to having precise information for non-censored values and no information about censored values.

Not so typical, real-life example of censoring was observed in Polish matura exam scores that caught pretty much attention on the internet. The exam is taken at the end of high school and students must pass it in order to be able to apply for higher education. Can you guess from the plot below what is the minimal amount of points that students need to get to pass the exam? Not surprisingly, the "gap" in otherwise normal distribution can be easily "filled in" if you take an appropriate fraction of the over-represented scores just above the censoring boundry. 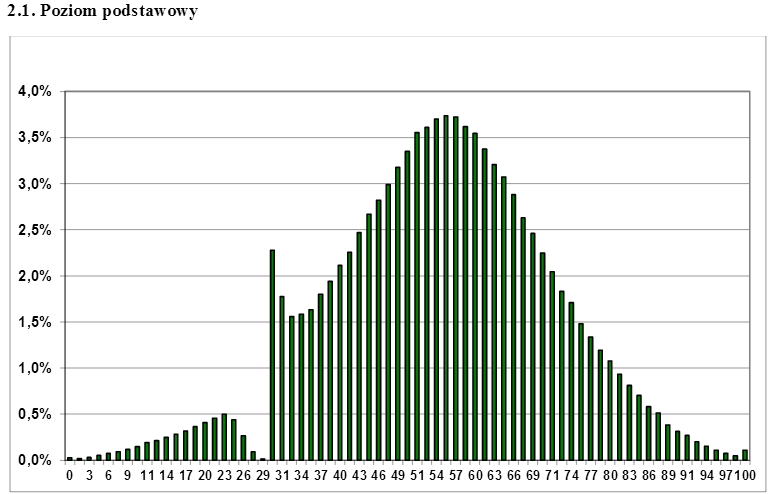 In case of survival analysis

censoring occurs when we have some information about individual survival time, but we don’t know the survival time exactly

(Kleinbaum and Klein, 2005, p. 5). For example, you treat patients with some drug and observe them until end your study, but you have no knowledge what happens to them after study finishes (were there any relapses or side effects?), the only thing that you know is that they "survived" at least until end of the study.

This does not mean that you cannot analyze truncated samples, but in such cases you have to use models for missing data that try to "guess" the unknown information.

Censoring is central to survival analysis.

The basic idea is that information is censored, it is invisible to you. Simply explained, a censored distribution of life times is obtained if you record the life times before everyone in the sample has died. If you think of time moving "rightwards" on the X-axis, this can be called right-censoring.

There are also other types: left-censoring and window-censoring. See e.g. Allison's 1984 text on Event History Analysis, published by Sage for an instructive introduction.

Example: If you are calculating divorce rates in population, you only want to include individuals who are at risk of divorcing (that is, they are married). If people end their marriage for reasons other than divorce (bereavement, annulment) then you want to censor them. They are no longer at risk of divorce. Your Kaplan-Meier estimates (and plots) should not include censored observations after the time point when they are censored, but should include them up until that time point.

Not the answer you're looking for? Browse other questions tagged survival cox-model censoring or ask your own question.

32
What is the difference between censoring and truncation?
10
Right censoring and Left censoring
7
What does 1 with an inequality in the subscript mean?
0
Truncation versus censoring with Kaplan-Meier
0
What does a truncated distribution mean?