Scientific question: I want to know if temperature is changing across time (specifically, if it is increasing or decreasing).

Data: My data consists of monthly temp averages across 90 years from a single weather station. I have no NA values. The temp data clearly oscillates annually due to monthly/seasonal trends. The temp data also appears to have approx 20-30-yr cycles when graphically viewing annual trends (by plotting annual avg temps across year): 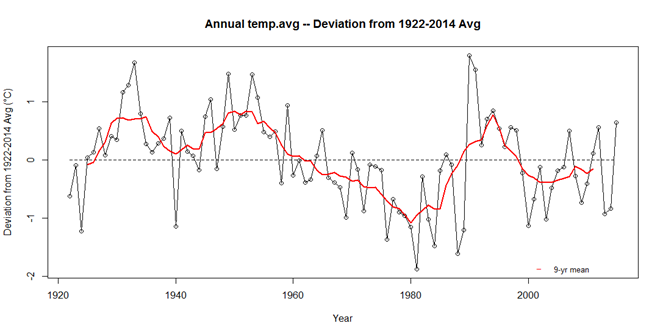 Models: I tried a number of gls models and selected models that had lower AICs to move forward with. I also checked the significance of adding predictors based on ANOVA. It turns out that including time (centered around 1950), month (as a factor), and PDO (Pacific Decadal Oscillation) trend data create the 'best' model (i.e., the one with the lowest AIC and in which each predictor improves the model significantly). Interestingly, using season (as a factor) performed worse than using month; additionally, no interactions were significant or improved the model. The best model is shown below:

I decided to check the residuals for temporal autocorrelation (using Bonferroni adjusted CI's), and found there to be significant lags in both the ACF and pACF. I ran numerous updates of the otherwise best model (mod1) using various corARMA parameter values. The best corARMA gls model removed any lingering autocorrelation and resulted in an improved AIC. But time (centered around 1950) becomes non-significant. This corARMA model is shown below:

An important concept in time series analysis is whether or not the underlying system is a stationary process. (The term 'ergodic' is also sometimes used.)

A visual example (taken from the Wikipedia article) will help explain the underlying property better than the math: 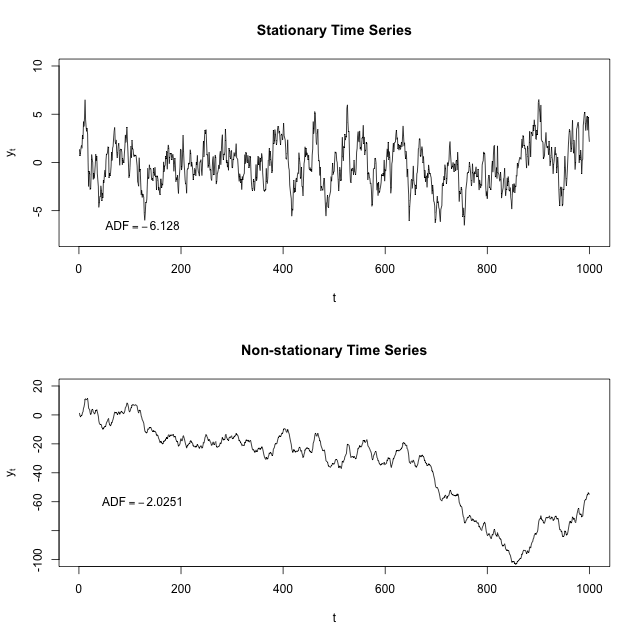 If you fit a line to the first image, it would be basically flat. The time series seems to have some sort of restoring force such that the further away you are from the center for the time series, the more likely you are to go back towards the center.

If you fit a line to the second image, it would point down. Here there actually seems to be a repelling force so that the further away from 0 you are, the more likely you are to keep going away from 0.

In order to determine whether a series is stationary or not, we have to turn to the math. Thankfully, this part is pretty easy. Before we tackle the ARMA(2,1) model that you fit, let's investigate simpler AR(1) models of the form:

What's the role of $\phi_1$ here? It's to start off the next value at some multiple of the previous value. If that multiple is sufficiently small, then the system is bounded--even if $\phi_1=0.5$ and so $x_t$ is likely to be in the same direction away from 0 as $x_{t-1}$, it'll probably be half the distance away (because $\epsilon$ is mean 0).

How to characterize these systems is the bread and butter of control theory, specifically linear feedback systems. A system will be stationary if its "roots" are outside of the unit circle and unstationary if it's inside.

Recall that a ARMA(2,1) model looks like the following:

We plug the values you fit into Wolfram Alpha and we get roots of 1.00842 and 6.13114. The second root is fine, but the first one is almost 1. If it were 1 exactly, you would be looking at something like a random walk, where as time goes on the parameter should randomly drift further and further away from the origin. If it were less than 1, it would be actively fleeing the origin.

So from that ARMA model you can calculate the range of temperatures that you expect the stationary distribution to look like. It'll probably be shockingly wide. You can also simulate what the next 100 years will look like, and see whether or not that model looks like "no temperature shift" or "continuing temperature increase".

TL;DR: a non-stationary ARMA model can have long-term trends, and even a stationary ARMA model can have 'medium-term' trends that look long-term for any given sample. I think there are reasons to prefer an ARMA model to a linear model, but that your linear model is non-significant after you fit an ARMA model shouldn't cause you to conclude "no temperature increase." Simulating a hundred more years with this model a thousand times, and then looking at that distribution, will give you more insight into what this model predicts than the parameters by themselves.

Not the answer you're looking for? Browse other questions tagged r time-series model-selection autocorrelation lme4-nlme or ask your own question.