What is the difference between a mixture model and a multimodal distribution?

A distribution that is a "Mixture model" has a very similar definition as a "multimodal" distribution.

In statistics, a mixture model is a probabilistic model for representing the presence of subpopulations within an overall population, without requiring that an observed data set should identify the sub-population to which an individual observation belongs.

What is the difference between the two? They sound like they are the same thing!

To complement @matt's answer, you can also consider the beta distribution with $\alpha = .5$ and $\beta = .5$. It is illustrated by the red line in the figure below (copied from Wikipedia). As you can see, it is multimodal (viz., bimodal), but it isn't a mixture distribution: 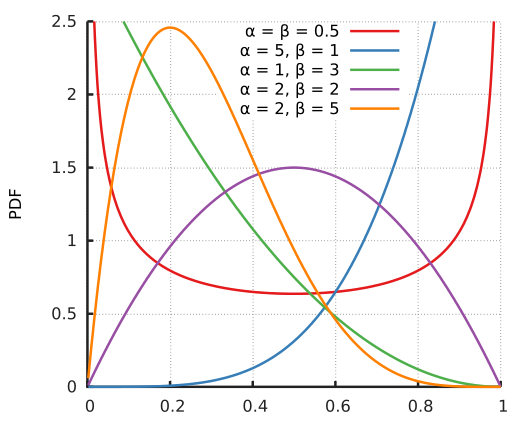 Imagine a scenario where two distributions (e.g., two univariate normals) have the same mean, but different variances. In this example, they together form a unimodal distribution from a mixture of two different populations.

3
Real Life Examples for Conditional Distributions that are not Unimodal

4
Multimodal data - where does one tail end and the other begin?
4
Bayesian mixture model for univariate continuous random variable
9
Convergence from the EM Algorithm with bivariate mixture distribution
2
Why are hidden Markov models considered 'mixture models'?
4
What is the difference between multimodal and multivariate?
2
What is the difference between a mixture model and a hierarchical model?
0
Mixture Model Distribution and Single Model Distribution Comparisons