What is the best method of reporting multiple tests of equivalence?

I am doing a study which will involve multiple tests of equivalence. Is there a standard table for reporting such results?

EDIT with more detail: It is a longitudinal study with 5 time points. Our hypothesis is that there is a change from baseline to 1 month and then stability after that. Initially, I thought of a multilevel model but there is no independent variable other than time. So I decided on t-tests between baseline and 1 month and TOST tests of equivalence between 1 and 3 months, 3 and 6, 6 and 9 and 9 and 12.

There were also 5 areas tested.

So, I need a way to summarize all these tests in a table

In particular, one could define indicator variables between the successive steps and then check their significance; essentially doing multiple $t$-test in one-go. I think that a random structure with a simple intercept and slope for each subject would be fine. I do not see the absence of independent variables other than time as a structural problem. If anything I think it simplifies matters further.

From what I understand given a starting value(val0) something takes place (step0) while stepping from the first measurement period to the second. For the subsequent intra-measurement time periods (step1, step2, step3) nothing happens. Measurement error is assumed constant. So one has something like this: 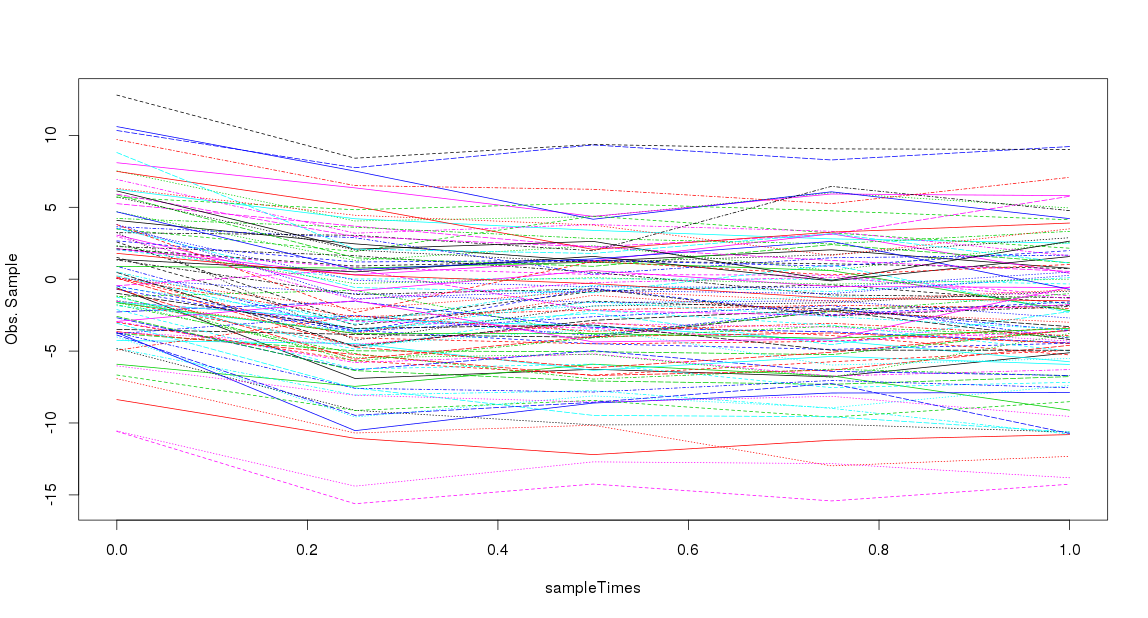 I create this sample with the following code:

And define a series of indicator variables for the periods stepping from one measurement point to the next. Notice that I define no "last step" step4; we do not know what happens after the last measurement point at $t_4$.

Using this design it is a relatively simple task to fit an LME and check if the stepX variables become statistically significant. The intercept and slope will absorb any subject-specific variations and one bootstrap that model directly. One can also use the $t$-values from the original LME too.

The results are quite reasonable I think, even for the modest sample size ($N = 10^2$) used. Wanting to be on the safe side I included a random slope and this came as probably redundant (sig02) (the original problem description does not specify it there is an additional time-varying trend) but excluding it does not alter the basic findings in any way: something happens during the step0 period.

Others have given you more direct answers to your question, but I'm going to try and show a different solution to the problem. Unless I'm misunderstanding you, it seems like a two-way (period area) fixed effects model would work best (with robust SEs, of course!). $$ y_i = \sum_k \alpha_k \times \mathbf{1}[i \in \text{period}_k] + \sum_j \beta_j \times \mathbf{1}[i \in \text{area}_j] + \epsilon_i $$

You could do an F-test (joint null test) on all the $\alpha_k$ to see if there is any change across time at all, and you can do a Wald test to see if a subset of coefficients (in your case $\alpha_2 = \alpha_3 = \dots = \alpha_K$) are the same. This also gets around all of the multiple testing problems you should be worrying about if you're doing a bunch of pairwise tests.

All of the above can be done within the text. For a visual inspection.. I know you're asking for a table, but I think a plot like this with 95% intervals is much more convincing. But maybe it's just the style of my field. 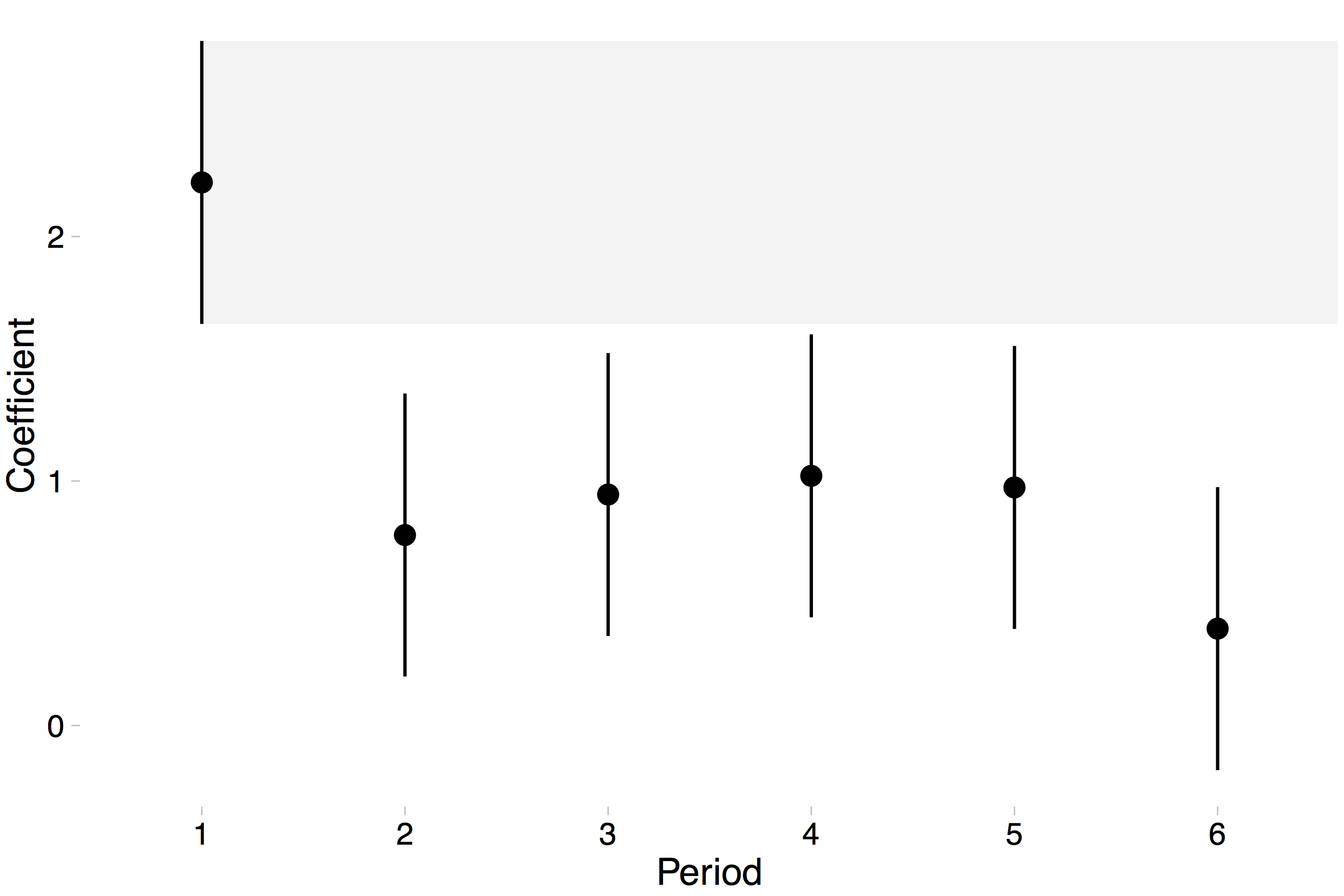 Not the answer you're looking for? Browse other questions tagged reporting tost or ask your own question.

56
What are some examples of anachronistic practices in statistics?
1
Why does the constant term have a P value in statistical programs?
2
Equivalence testing and difference-in-difference measures
0
FDR correction when a lot of results are expected to be True Positives

13
Number of significant digits to report
9
Equivalence tests for non-normal data?
9
Intuitive explanation of differences between TOST and UMP tests for equivalence
9
Equivalence testing - tost method - why CI of 90%?
4
The most conventional way to report the difference between two samples (different size, varying distribution and skewness)
21
What is the point of reporting descriptive statistics?