I have electric signals represented as 2(internal)d data. Each data point is in the form (<timestamp>, <power_value>). I want to be able to differentiate 4 different states that a window of the signal can belong to. 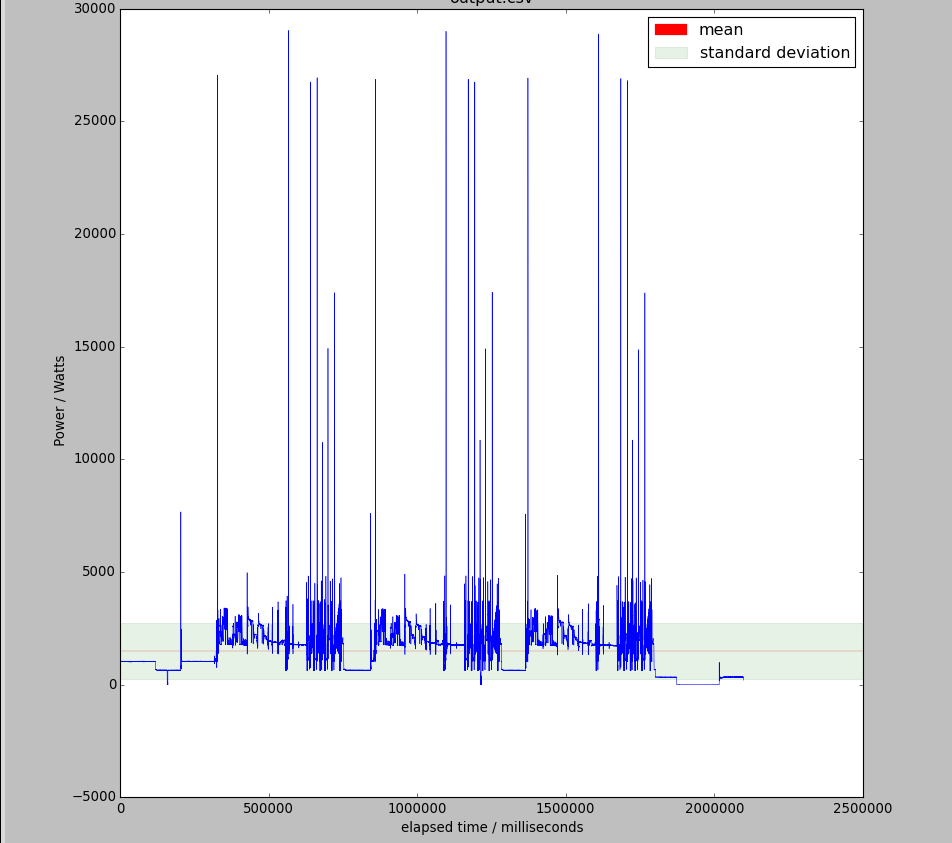 Here we can see all 4 different states represented.

I want to be able to determine in which of those states a specified length window (the length is something that must be discussed too) belongs to.

I started off with that because at first the classification had to be able to differentiate just 3 states (off, idling, on) which even with those simple statistical features is very easy. I could even as well right a simple if-then-else instead of training decision trees and the results would be as accurate because those three states have very distinct values for those features. But with adding a fourth state the classifier misfires a lot. And that's normal. It might not be very well depicted in that picture above but Stand-By and On, in particular areas, have a bit common variance and averaged values.

I am not interested in going for a pattern matching approach, although that could solve all those problems robustly but that would also mean that I would have to create sets of reference patterns which gives rise to many different implications.

What I am looking for is a set a features that will enable me to efficiently differentiate those states. First do you think that is even possible?

My understanding tells me that maybe a set of frequency domain features could improve the accuracy. I have only used such features (MFCC) once though, for audio classification, but that doesn't apply to this case.

If you think that this is possible, can you recommend a set of features that it would make sense to try out, or point me to a study that you think is well suited for this case?

Here is an instance of the signal 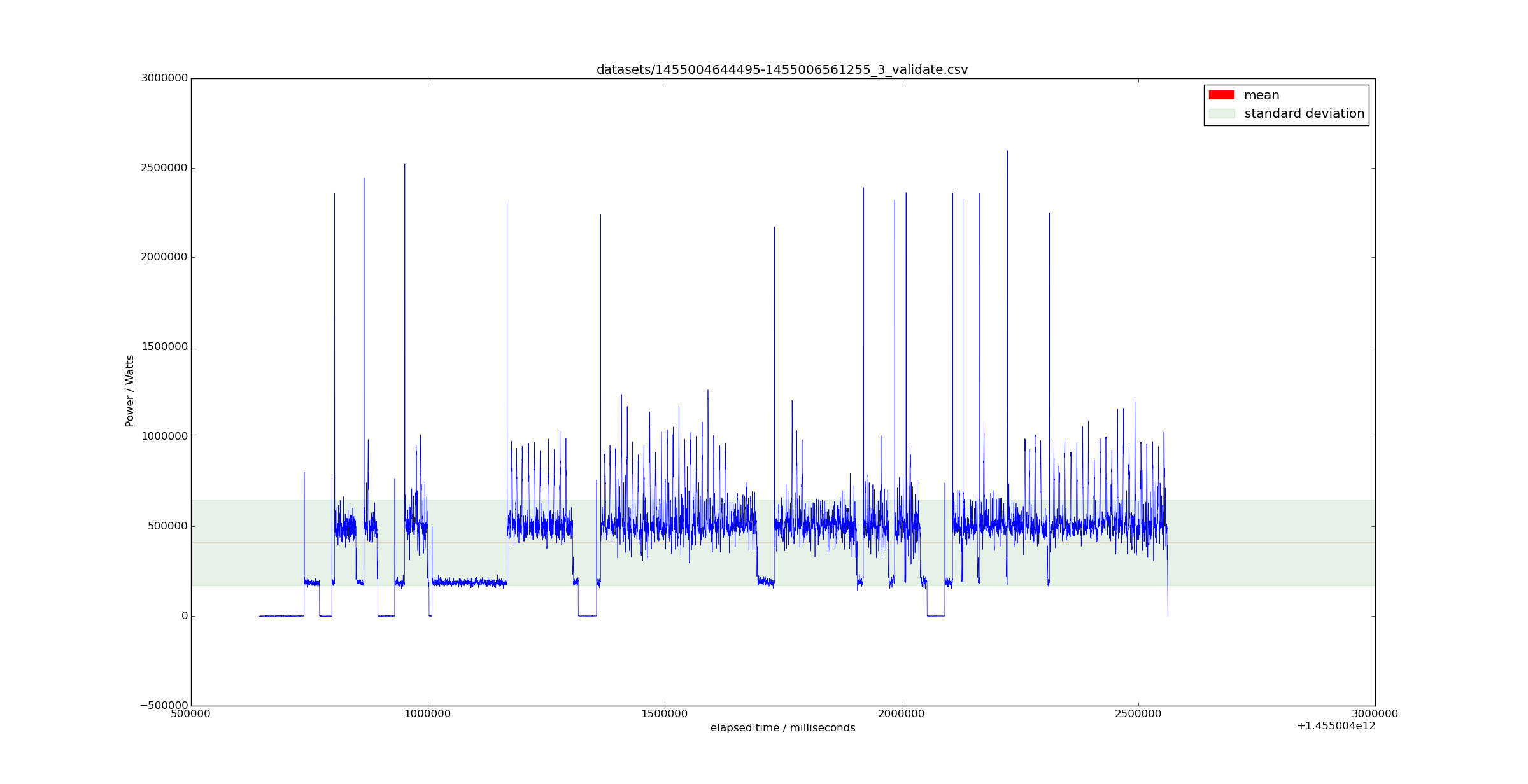 and here is the spectogram 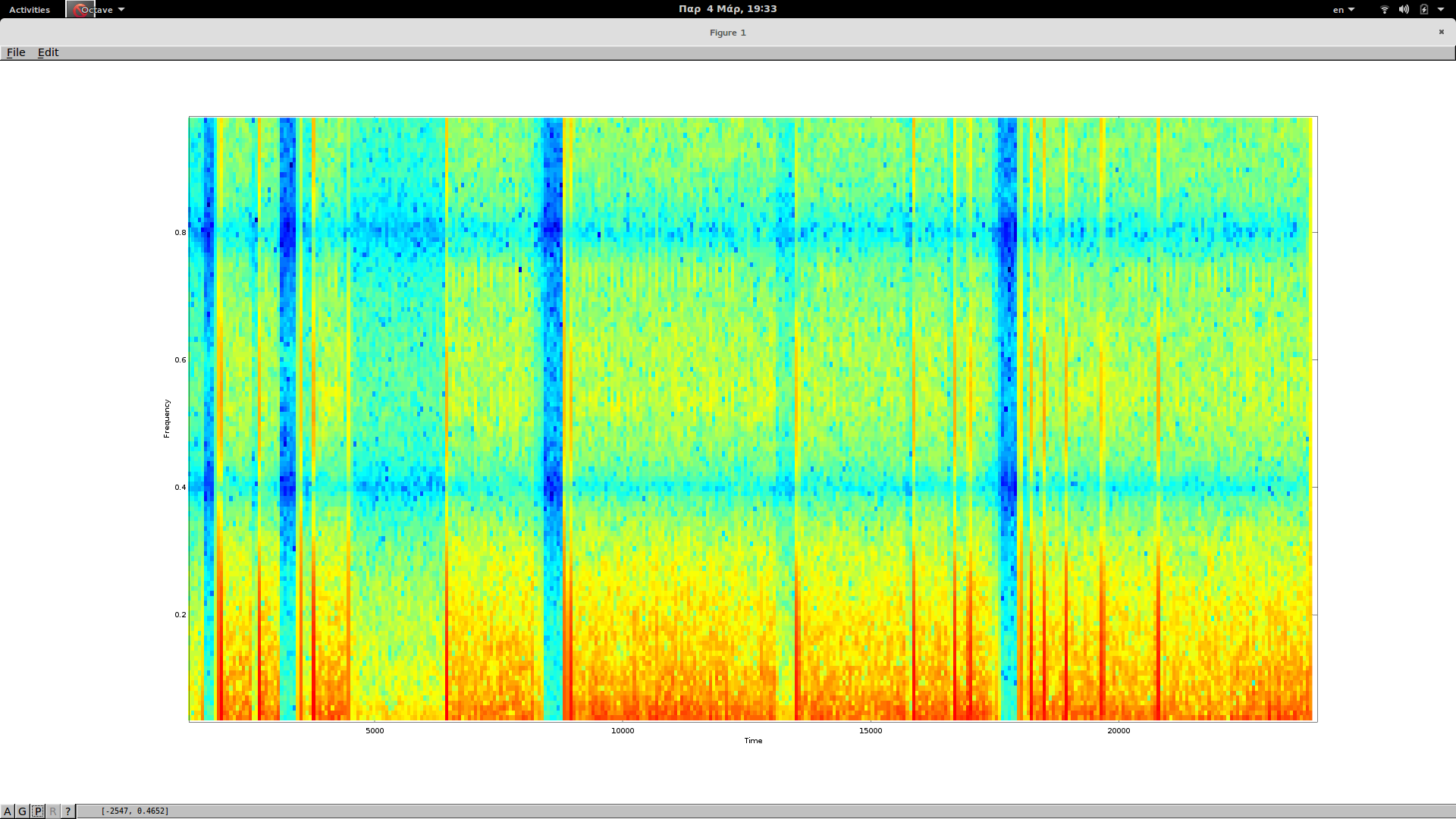 After some days working on the problem I managed to make some progress. I experimented with different sets of features and added a few new ones.

What I did was to extend my statistical features by adding the skewness and the kurtosis. I also moved towards a more pattern matching approach by adding dtw distances from reference patters (one of each state). That last step improved the results on the sliding window classification quite a bit.

My problem still lies on the sliding technique I use for the classification, since every time the window falls into intermediate (also unlabeled) cases the classifier has a hard time concluding on what is that it is seeing.

What I am trying to do now is to use SVM instead of RandomForests with a polynomial kernel (degree 4). I am using the scikit-learn implementation. The problem is that the classifier is always categorizing the data as state_3. I think I am imposing some kind of bias, but I don't know why and how. Do you have any ideas what might be going wrong?

To get an idea how the labeling looks, here are some labeled instances of the signal

Instead of polynomial kernel, I used a linear kernel for the SVM, and the classifier worked correctly. Actually I got the best results so far. I might have to work extra on making the whole classification pipeline more efficient because svm's and the extra feature extraction is making everything very slow

From my experience, often the mass calculation of different features with subsequent inspection of their significance can lead to interesting insights. You could use the python package tsfresh to automatically extract a huge of number of features and filter them for their importance.

So regarding your question: You can find inspiration about other features in the documentation about the calculated features of tsfresh here.

Not the answer you're looking for? Browse other questions tagged machine-learning time-series svm feature-engineering signal-processing or ask your own question.