We have process where events are occurring at a rate of $B$, where the distribution of events in a fixed time frame can be described using Poisson statistics. Thus, the events can be modeled using a homogeneous Poisson point process where the intensity function is $\lambda(t) = B$. We are observing the process for a total time of $T$. If we are scanning over the observed events with a integration time of $\delta$, what is the probability of finding a maximum of $N$ events?

I have been able to figure out that the field of statistics used to investigate this problem is called "scan statistics". I have also found a paper discussing the subject though the math was to dense for me. Is there a relatively simply explanation on how to calculate the probability that I am seeking? Is there a open source library (in for example R) available with this functionality?

Bonus question: Is it possible calculate the probability of finding a maximum of $N$ events in a inhomogeneous Poisson process?

After working on the problem for a few days I finally found a paper that had an explanation that I could (somewhat) understand. The paper in question is

Approximation and Simulation of the Distribution of Scan Statistics for Poisson Processes in Higher Dimensions, Sven Erick Alm 1997

It turns out that finding an exact solution to my problem was not feasible but the paper presented an equation for calculating an approximation. An abbreviated explanation of the approximation follows.

We are scanning over a Poisson process (with the scanning process $Y(t)$) of length $T$ with a time window of size $\delta$. The maximum value found when scanning is $N$ and this can be expressed as.

The cumulative distribution function of $N$ can be approximated using the following expression. 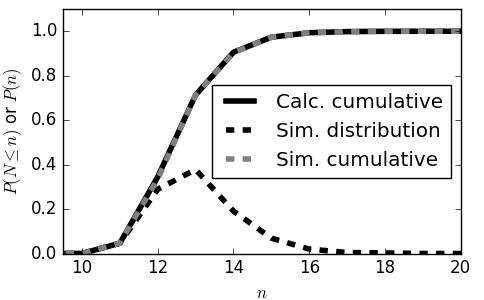 The simulation and approximation was implemented in Python and I have provided the implementation of the approximation in case it is of use to anyone.

Not the answer you're looking for? Browse other questions tagged poisson-process or ask your own question.