EDIT:
This question has been heavily paraphrased and re-asked in a broader, but better way here:
Paired comparison of instruments using different measurement samples

This is going to be a long one, since it's wrecking my nerves for days now. =)

I have 4 algorithms (A, B, C and D).
Each outputs an integer as a result of its calculation. Consider them instruments with slight variations in how they calculate outputs.

I would like to rank the algorithms' performances according to the following criteria:

The algorithm with the greatest C1) and smallest C2) wins. That algorithm would have the greatest amount of "true" determinations on average (C1), with the smallest inconsistencies in scores, making it the most consistent (C2).

My problem is with C2).
Since I'm comparing spreads across different determination-score-distributions, I'm not sure which of the measures to employ. I'm aware that these belong to estimators of scale or estimators of dispersion.
Here's the boxplot of algorithms A, B, C and D. 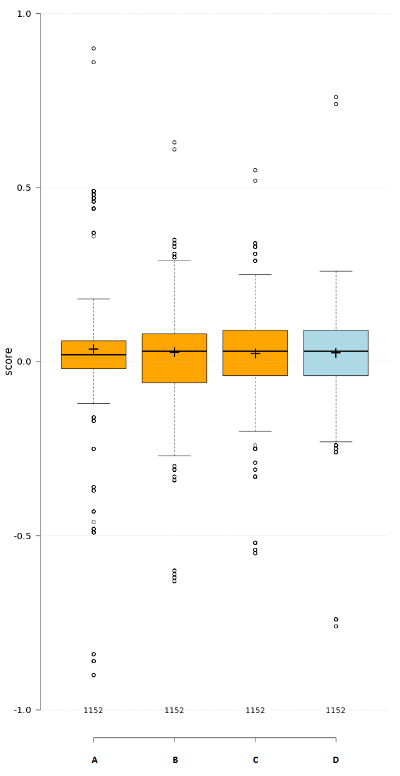 I've gone through a lot of estimators, and devised a list of the desired properties:

Here are my questions:
I'm not sure whether I need 7) as a desired property.
As can be seen from the boxplot, means and medians of algorithms are all different. I'd like to avoid a measure which is affected by this:

To give a one-liner of what I think I'm looking for:

Robust, preferably non-parametric estimator of scale (or dispersion), invariant to change in central-tendency (or location), so that it could be used for comparing (dispersion of) samples.

Thanks for ur time and sry for the long post!

EDIT: Tnx to German Demidov, I've plotted the Bland-Altman plot of A vs. D.
Could I use those to find the more dispersed one? 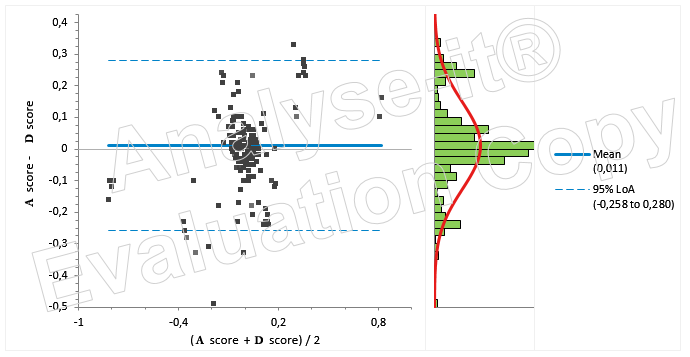 As for me, it is not the best way of ranking. Your means have real values, so (as I understood) C1 will always be satisfied so you will not have to apply C2 selection criteria. Also you should not forget that you have confidence intervals for means, not just point estimations of means: it can be better by chance. So I would look at more traditional ways to measure performance, such as $r^2$, and of course use cross-validation (or train/test approach). Also I would recommend to exclude several outliers that are wrongly estimated by all 4 algorithms.

Not the answer you're looking for? Browse other questions tagged estimation estimators variability dispersion scale-estimator or ask your own question.

33
What would a robust Bayesian model for estimating the scale of a roughly normal distribution be?
1
Measure of dispersion for dataset with zero mean
3
What is a useful, robust descriptive measure of scale for latency measurements?