Data transformation for heavy tailed data for mixed model use

I am trying to transform my data to meet assumptions of a mixed model (lme4). This is the qqplot for the data. 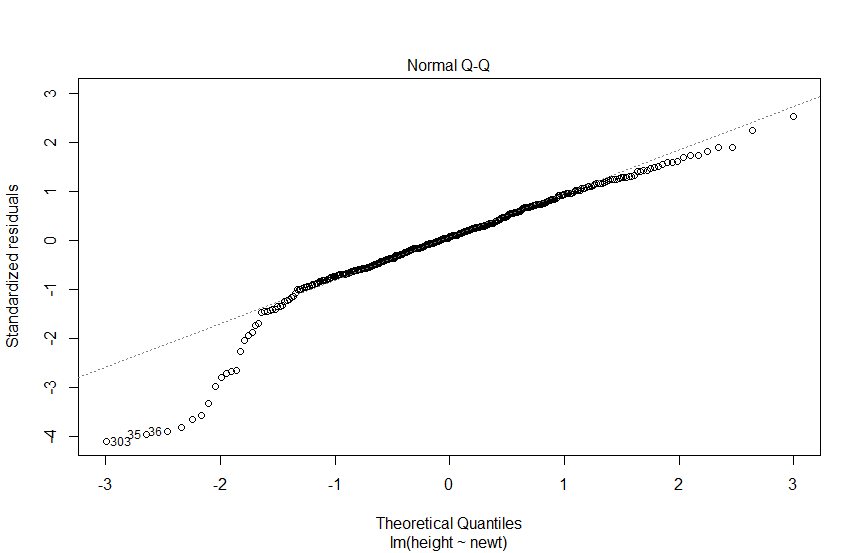 I have tried the traditional transformations: log & square root.

The R syntax presumed intelligible to all suggests just a regression of height versus newt, whatever that is. However, the statement of a mixed model appears to contradict that. I am only an occasional R user and am entirely open to correction on such points. The resolution may be that the OP intends to proceed to a mixed model.

So the graph shows the residuals after predicting an untransformed response, whereas a logged response and a rooted response were also considered.

This distribution isn't perfect, but it doesn't alarm me by itself.

I'd be much more concerned to

The lower tail makes me wonder whether there is some heterogeneity in the individuals sampled, perhaps a mixture of two or more distinct groups. If so, any known grouping should be considered as another predictor.

As height presumably must be positive, I would certainly want to compare models with identity and log links. If the regression model predicts any negative heights, it is unacceptable. A feature of models with logarithmic link is that positive predictions are guaranteed.

In essence, the marginal distribution of residuals is the least important aspect of a linear model, for all that Gaussian or normal distribution is an ideal condition. In principle and in practice, whether the structure is linear to a good approximation, whether data points are independent and whether variability is at least roughly constant are all more important.

More cautiously, although many comments are possible, definitive advice is hardly possible if the raw data and the exact model syntax used are out of sight.

Try an inverse hyperbolic sine transformation. It converts heavy-tailed data into something much more tractable and normally distributed.

Not the answer you're looking for? Browse other questions tagged mixed-model data-transformation skewness heavy-tailed or ask your own question.

3
How to calculate confidence intervals of $1/\sqrt{x}$-transformed data after running a mixed linear regression in stata?
18
Heavy-tailed errors in mixed-effects model
1
Transformation of data with zero and R squared
3
What transformation should I use for a bimodal distribution?
0
Data normalization for lme mixed model_R
1
Interpreting how much my linear model has improved after Box-Cox transformation