What are the usual approach to modelling binary time series? Is there a paper or a text book where this is treated? I think of a binary process with strong auto-correlation. Something like the sign of an AR(1) process starting at zero. Say $X_0 = 0$ and $$ X_{t+1} = \beta_1 X_t + \epsilon_t, $$ with white noise $\epsilon_t$. Then the binary time series $(Y_t)_{t \ge 0}$ defined by $$ Y_t = \text{sign}(X_t) $$ will show autocorrelation, which I would like to illustrate with the following code

What is the text book/usual modelling approach if I get the binary data $Y_t$ and all I know is that there is significant autocorrelation?

I thought that in case of external regressors or seasonal dummies given I can do a logistic regression. But what is the pure time-series approach? 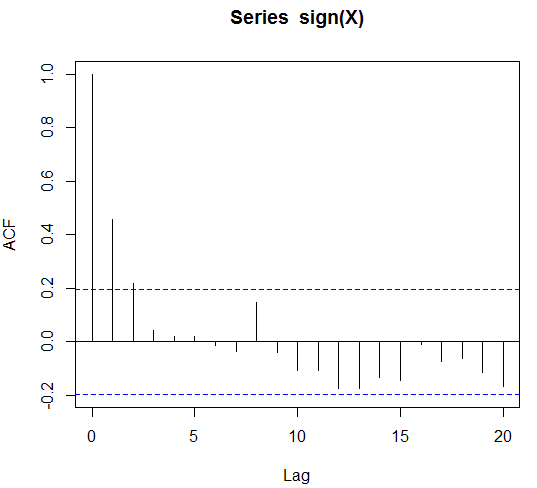 EDIT: to be precise let's assume that sign(X) is autocorrelated for up to 4 lags. Would this be a Markov model of order 4 and can we do fitting and forecasting with it?

EDIT 2: In the meanwhile I stumbled upon time series glms. These are glms where the explanatory variables are lagged observations and external regressors. However it seems that this is done for Poisson and negative binomial distributed counts. I could approximate the Bernoullis using a Poisson distribution. I just wonder whether there is no clear text book approach to this.

The class of score-driven models might be of interest to you:

Score-driven models were applied to a binary time series of outcomes of The Boat Race between Oxford and Cambridge,

In that paper, the time-varying probability was obtained with the score-driven methodology by using the (free) Time Series Lab software package.

The score-driven model for binary observations in short:

[Disclaimer] I am one of the developers of Time Series Lab.

If I understand your question correctly, the "usual approach" would be a dynamic probit approach, cf. "Predicting U.S. Recessions with Dynamic Binary Response Models", Heikki Kauppi and Pentti Saikkonen, The Review of Economics and Statistics Vol. 90, No. 4 (Nov., 2008), pp. 777-791, The MIT Press, Stable URL: http://www.jstor.org/stable/40043114

Whether that model class directly reflects your underlying example process might depend on what epsilon_t is like exactly, but I think the model fits your statement "all I know is that there is significant autocorrelation".

Not the answer you're looking for? Browse other questions tagged regression time-series logistic binary-data autoregressive or ask your own question.

9
Is there a difference between an autocorrelated time-series and serially autocorrelated errors?
1
Detect trend in time series
3
Is this explanation of the Box-Jenkins approach correct?
4
Serially Correlated Regressors
6
Independent Bernoulli trials vs markov chain
0
Time series - autocorrelation
1
Regression of Stationary Time Series in Non-Stationary Time-Series