A non-uniform distribution of $p$-values…again

There appear to be many multiple-hypothesis-testing situations that result in a non-uniform distribution of $p$-values. I would like to describe one simple numerical experiment, and understand why it does not lead to the 'expected' result.

The numerical experiment is as follows: I generate 1000 Rayleigh random numbers using an arbitrary value of $b$ and then standardize these numbers by dividing each number by the overall sample mean. I then perform a KS goodness-of-fit test (where the null hypothesis is that the data is drawn from an SR distribution) and save the $p$-value. The preceding is repeated multiple times (e.g., 1000 times). A histogram of the resulting 1000 $p$-values is plotted.

Below is the MATLAB code. Question: Why are the $p$-values not uniformly distributed? 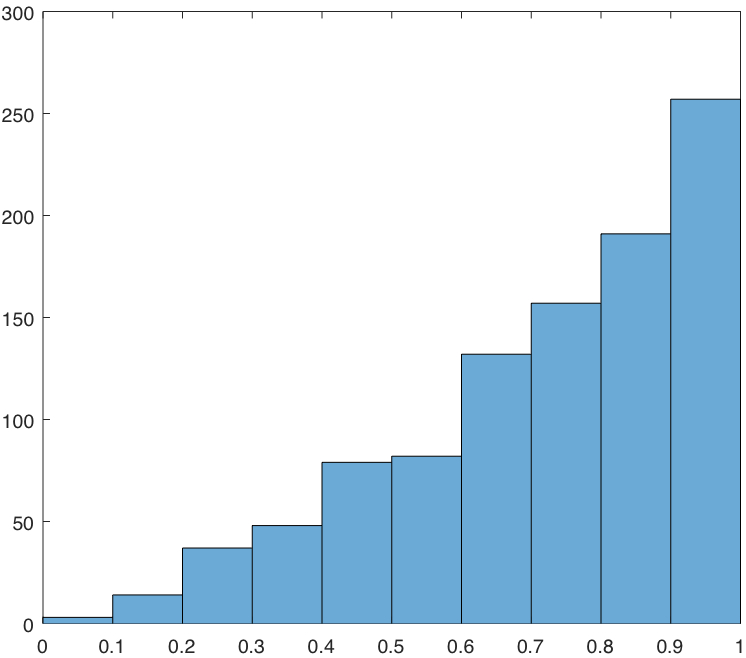 When you write this:

You're talking about dividing by the population mean $\mu_X$, a fixed constant, giving $Y_i=X_i/\mu_X$.

Then in your experiment, you divide by the sample mean:

standardize these numbers by dividing each number by the overall sample mean.

More specifically, I think you should tend to see fewer large deviations from the Rayleigh cdf in this statistic than you see with the one that actually has the standard Rayleigh distribution, because the sample estimate will produce a fitted cdf that's "closer to the data" than the true one; as a result dividing by that estimate produces a standardized ecdf that's closer to the hypothetical distribution than you'd get if you divided by the population mean.

As a result I'd expect you should get an excess of large p-values and a deficit of small ones.

Your results are pretty much exactly what I'd have anticipated.

* (unfortunately, the text of the Wikipedia article at the link presently suggests the Lilliefors test is only for normality, but he also covered the exponential case, as you can see in the "Sources" section at the bottom of the article)

You could actually use the exponential-version of the Lilliefors test [1] for the Rayleigh distribution -- since the square of a Rayleigh random variate is exponential, you can just square your original data and test for exponential. (In this case you'd be dividing the squared data by its mean, not squaring your scaled values.)

Note that the asymptotic 5% critical value for the Kolmogorov-Smirnov is $1.36/\sqrt{n}$ while that for the Lilliefors when testing the exponential is $1.077/\sqrt{n}$ (i.e. as I suggested above, dividing an exponential sample by its mean produces a scaled ecdf which tends to be closer to the hypothetical than if you divided by the population mean).

[You could obtain critical values (and/or p-values) for a Lilliefors test using simulation under the null hypothesis. This is what Lilliefors actually did, but his simulation-sizes were pretty small (it was the 1960s, so computing facilities were limited) -- so you'd probably want to redo the simulation, particularly if you want p-values. If critical values are sufficient, there are more recent/more accurate tables available]

Added in edit: After a bit of googling around, it looks like the idea of using Lilliefors test (for the exponential) to test for Rayleigh (after transforming) was discussed in Edgeman & Scott (1987) [2].

Not the answer you're looking for? Browse other questions tagged p-value goodness-of-fit or ask your own question.

22
Comparing and contrasting, p-values, significance levels and type I error
5
Why so many large p-values when I repeat an experiment?
6
Understanding multiple KS tests
31
Are smaller p-values more convincing?
1
p-values in sign test
0
Why does adding 1 to all values of this dataset change the result of Chi-square distribution test?
7
Why am I not getting a uniform p-value distribution from logistic regression with random predictors?
28
Does a uniform distribution of many p-values give statistical evidence that H0 is true?