When is probability of type-I error less than the level of significance?

I could get the sense of probability of Type I error equals $\alpha$ but when it is less than $\alpha\;?$

I'm not getting that.

Is it a textbook-erratum? If not, when does this case arise?

It is not a typo and for example arises when testing composite hypotheses, such as a one-sided test of the mean of a distribution, as in $H_0:\mu\leq0$ against $H_0:\mu>0$. We choose the critical value (equivalently, $\omega$) so that the probability of a type-I error is still just $\alpha$ even when $\mu$ is very close to being in the set specified by $H_1$, i.e., when $\mu=0$, i.e., when the probability of a type-I error is highest.

The plot below shows the probability of rejecting $H_0$, i.e., the power function. The region to the left of the vertical dashes is where the null is true, and you can see that the rejection probability is .05 only at $\mu=0$. 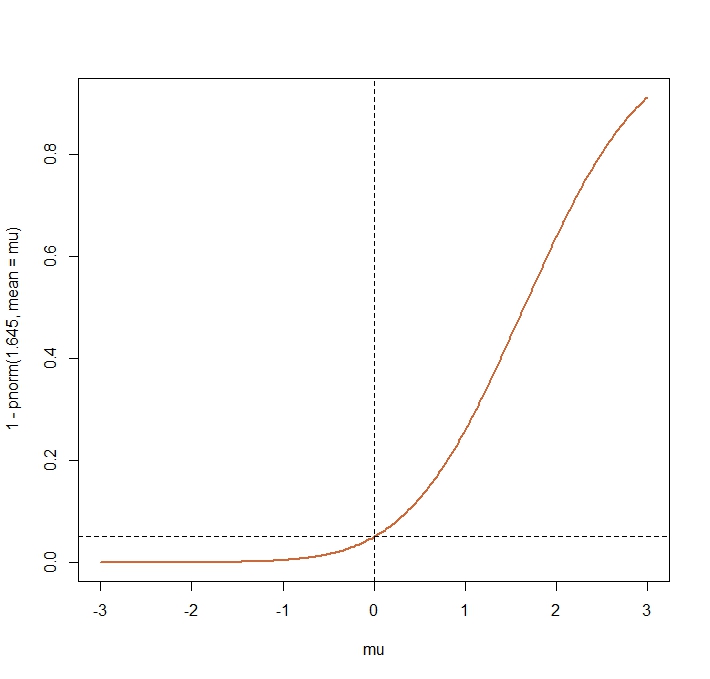 The probability of a type I error may be stricly smaller than the significance level $\alpha$ for discrete distributions. E.g. if you want to test whether a coin is upward biased i.e. $H_1: p > 0.5$ and we test this against $H_0: p \le 0.5$.