This is a very naive question: I am confused on how people test the equality of two means and two distributions.

Say that I collected the means of two populations and I wanted to test whether they were statistically different from one another.

That is, if two distributions were the same, then their means would be the same as well.

So if you're doing some hypothesis test where, under the null (and given any additional assumptions) the distributions are the same, the means will be the same.

But be careful; the implication doesn't go in the reverse direction.

Certainly! You need to consider what's going on with the alternative.

Imagine for example that under the null I have equality of distribution and then under my alternative the spreads can differ but the means remains the same. (To put it more carefully, the equality of location would be one of the assumptions rather than actually in the alternative)

Imagine that under the null both densities look like the black one below... 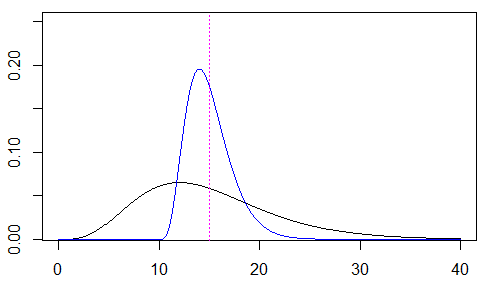 ... but under the alternative one of them becomes more concentrated about the common mean, like the blue one.

There are a variety of possible test statistics for such a case, but most would be of little use as a test of equality of means.

As an example, consider two radcally different but symmetric functions of x. They will both have a mean of zero, but depict clearly different distributions.

4
How can a t-test be used to compare the distributions between groups of data?
2
Hypothesis testing for multiple distributions
3
What test do I use to check if two samples came from different population?
0
Asymptotic test of equality of coefficients from two different regressions
9
Confused about the Mann-Whitney $U$ test. Does it test distribution equality (pdf) or just mean/median equality?
1
Bootstrap/Permutation test for equality of two distributions