I am carrying out a Poisson regression with the end goal of comparing (and taking the difference of) the predicted mean counts between two factor levels in my model: $\hat{\mu}_1-\hat{\mu}_2$, while holding other model covariates (which are all binary) constant. I was wondering if anyone could provide some practical advice on when to use a log link versus an identity link. What are the pros can cons of these two different link functions in Poisson regression, given my goal of comparing differences?

I also have the same goal in mind for a logistic/binomial regression (to use a logit link or an identity link) to compare the difference in proportions between two factor levels and need similar advice. I've read some of the posts here that touch on this issue, but none seem to explain why or when one might chose one link over the other and what the pros/cons might be. Thanks in advance for your help!

I also realize that the main purpose of using certain links functions is to restrict the range range of possible predicted values to be within the range of the mean response (e.g. for logistic, the range is restricted to be between 0 and 1 and for the log link, the predictions are restricted to be positive numbers). So, I guess what I'm asking is that if I use an identity link for say a logistic/binomial regression, and my results are within the range (0,1), is there really any need to use a logistic link function or could I just make thinks simpler an use an identity link?

Cons of an identity link in the case of the Poisson regression are:

But, ultimately this is an empirical question. Fit both models. Perform whatever checks you like. If the identity link has a lower AIC, and does as well or better on all your other checks, then run with the identity link.

In the case of the logit model vs the linear probability model (i.e., what you refer to as the identity link), the situation is a lot more straightforward. Except for some very exotic cases in econometrics (which you will find if you do a search), the logit model is better: it makes fewer assumptions and is what most people use. Using the linear probability model in its place would verge on being perverse.

As regards interpreting the models, if you are using R, there are two great packages that will do all the heavy lifting: effects, which is super easy to use, and zelig, which is harder to use but great if you want to make predictions.

In the case of Poisson models I would also say that the application often dictates whether your covariates would act additively (which would then imply an identity link) or multiplicatively on a linear scale (which would then imply a log link). But Poisson models with an identity link also normally only make sense and can only stably be fit if one imposes nonnegativity constraints on the fitted coefficients - this can be done using the nnpois function in the R addreg package or using the nnlm function in the NNLM package. So I don't agree that one should fit Poisson models with both an identity and log link and see which one ends up having the best AIC and infer the best model based on purely statistical grounds - rather, in most cases it is dictated by the underlying structure of the problem that one tries to solve or the data at hand.

For example, in chromatography (GC/MS analysis) one would often measure the superimposed signal of several approx Gaussian shaped peaks and this superimposed signal is measured with an electron multiplier, which means that the measured signal are ion counts and therefore Poisson distributed. Since each of the peaks have by definition a positive height and act additively and the noise is Poisson, a nonnegative Poisson model with identity link would be appropriate here, and a log link Poisson model would be plain wrong. In engineering Kullback-Leibler loss is often used as a loss function for such models, and minimizing this loss is equivalent to optimizing the likelihood of a nonnegative identity-link Poisson model (there is also other divergence/loss measures like alpha or beta divergence that have Poisson as a special case).

Below is a numerical example, including a demonstration that a regular unconstrained identity link Poisson GLM does not fit (because of the lack of nonnegativity constraints) and some details on how to fit nonnegative identity-link Poisson models using nnpois, here in the context of deconvoluting a measured superposition of chromatographic peaks with Poisson noise on them using a banded covariate matrix that contains shifted copies of the measured shape of a single peak. Nonnegativity here is important for several reasons: (1) it is the only realistic model for the data at hand (peaks here cannot have negative heights), (2) it is the only way to stably fit a Poisson model with identity link (as otherwise predictions could for some covariate values go negative, which wouldn't make sense and would give numerical problems when one would try to evaluate the likelihood), (3) nonnegativity acts to regularize the regression problem and greatly helps to obtain stable estimates (e.g. you typically don't get the overfitting problems as with ordinary unconstrained regression, where overfitting typically results in coefficients with very large absolute magnitude and opposite signs - you see this effect in the OLS estimate below) and (4) nonnegativity constraints result in sparser estimates that are frequently closer to the ground truth; for the deconvolution problem below e.g. performance is about as good as LASSO regularization, but without requiring one to tune any regularization parameter. (L0-pseudonorm penalized regression still performs slightly better but at a greater computational cost) 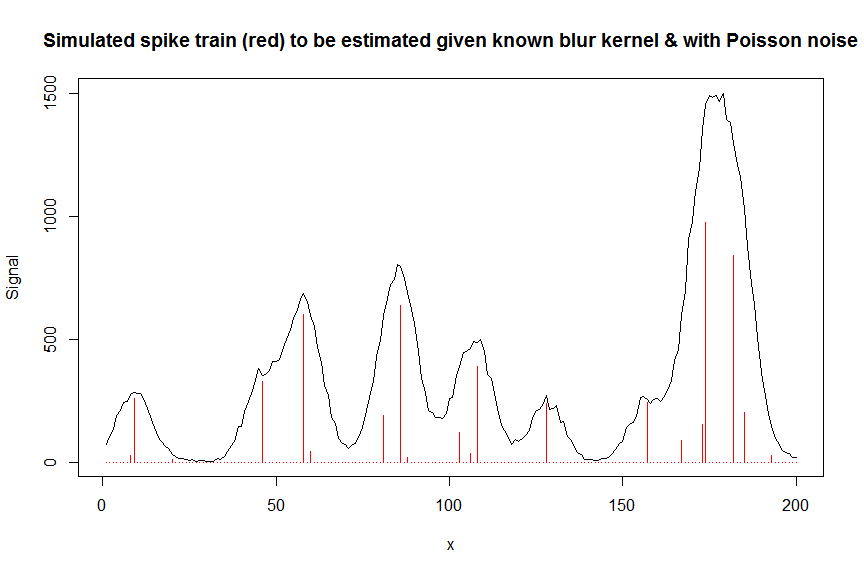 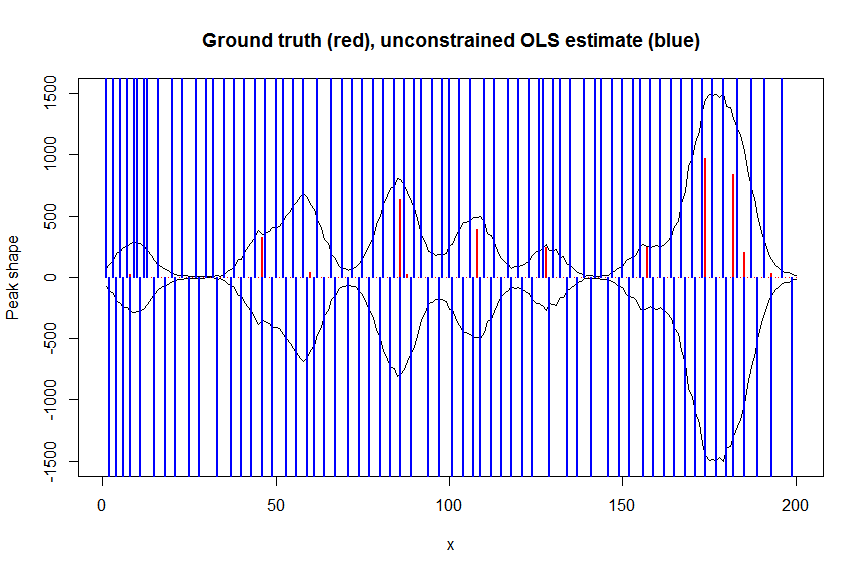 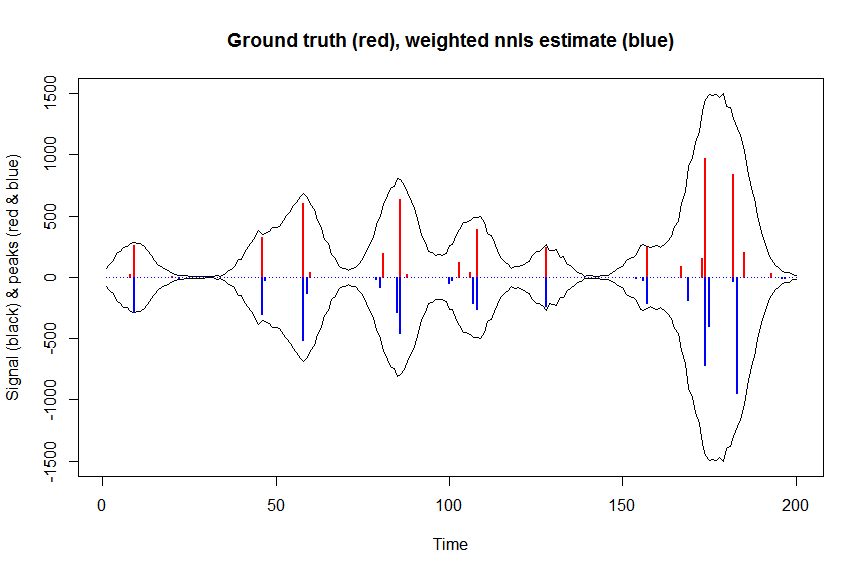 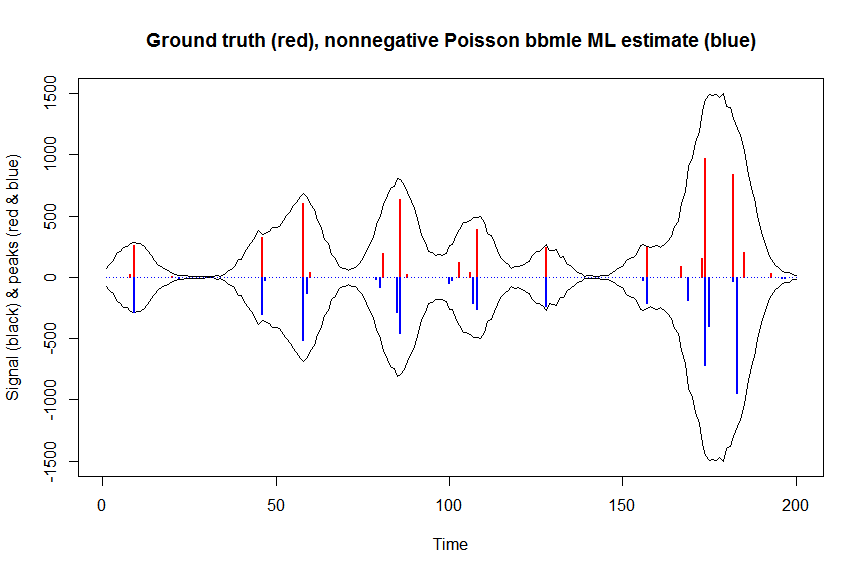 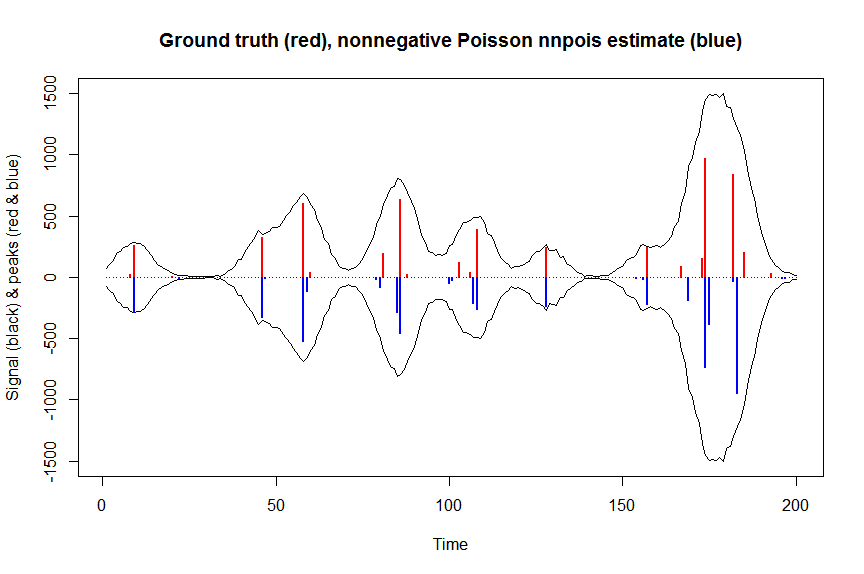 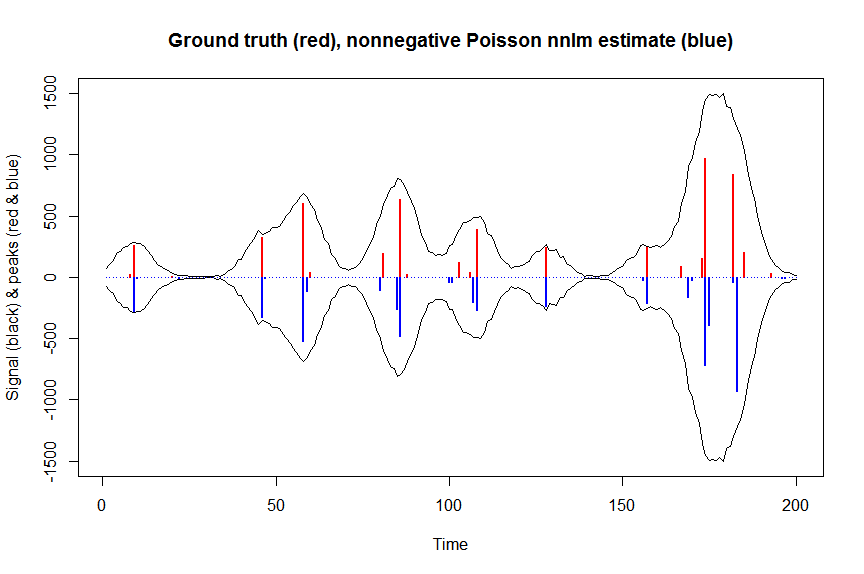 Not the answer you're looking for? Browse other questions tagged logistic poisson-regression link-function or ask your own question.

21
Do statisticians assume one can't over-water a plant, or am I just using the wrong search terms for curvilinear regression?
5
Relationship between Poisson generation and generalized Kullback-Leibler divergence
4
Are GLMs just glorified WLS regressions?
4
Closest approximation of a Poisson GLM using weighted least squares analysis to take into account mean/variance relationship
2
why not Fitting GLMs with least squares?
1
Why do we choose exponential function as the nonlinearity in Possion GLM
1
Link functions and fitting models to data with mle2 in bbmle

5
How do I decide which family of variance/link functions to use in a generalized linear model?
12
OLS vs. Poisson GLM with identity link
3
Link functions for Binomial Regression
6
Relationship between binomial regression link function and goodness-of-fit tests [now with link to R code]
5
Offset in Poisson regression when using an identity link function?
1
Log-likelihood using the link identity for poisson?