I went through some of the forums here and looked for explanations online but I couldn't figure out the answer for this:

If percentages represent probabilities, what does weighted and "unweighted" average of a list of values represent?

It is still not really clear for me, though. Does anybody have some clearer ideas on what the probabilities would mean?

Also, is it possible at all to assign meaningful values to both weighted and unweighted average on the same dataset?

What you are calling the "weighted average" is the only proper way to calculate the percentage of satisfied customers in both shops. Taking average of percentages (what you call "unweighted" average) will give you useless results if your samples differ in size.

Imagine extreme case: you have two shops A and B, in shop A there was one customer and he was not satisfied and in shop B there was 100 customers and 90 of them were satisfied -- would you conclude that 45% of customers of both shops were satisfied? Obviously not!

Smaller sample is much less reliable, so it should not be included in the final estimate with the same weight as the larger one. Speaking more formally, estimate from the smaller sample has a greater error.

You can easily convince yourself why using pooled mean is much better idea that using the raw one by conducting a simple simulation study. I simulate two shops, with $n=8$ and $n=100$ customers, both having the same proportion of satisfied customers. If you compare the results obtained using raw mean ("unweighted") and the pooled ("weighted") estimates, you'll see that when using the raw mean the variability of difference between the estimate and the true value is much greater. Saying this in simple English: using raw mean you are in greater risk of obtaining the wrong estimate, than in the case of pooled mean. 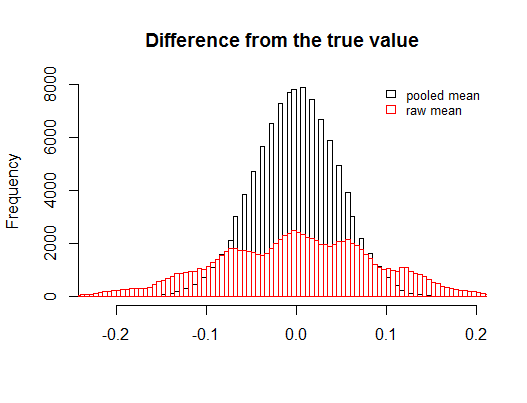 So there is a student Joe. Student Joe has a deal with his mom that he will get a good allowance as long as he keeps a grade of a B or better. Joe is graded based on tests and quizzes. His scores are as follows:

When Joe’s mom asks how hes doing in school he says, “Good, I have an 80.7% average!!”. His Mom says “Great, here is your allowance”. A month later Joe’s mom gets his report card and sees a 70.9%. Furious, Joe’s mom gets a meeting with Joe and the teacher. Joe explains he was averaging his test percents and Joe’s teacher shows him how the “weighted average” is calculated. Coincidentally Joe's teacher also lowers Joe’s grade to a D.

Not the answer you're looking for? Browse other questions tagged probability average weighted-mean or ask your own question.