I though about depressive symptoms being a moderator, but as far as I'm concerned moderators are only appropriate if you look at causal relationships (which I don't, because I look at correlation). Partial correlation also do not seem appropriate cause I want to predict, not control.

Under this model, you will get a fitted model that estimates the coefficients for both of the response variables. Some subsequent mathematics will allow you to determine the estimated correlation between the two response variables when the explanatory variable is held fixed.

You want to study the correlation between self-harm and aggression, but thinks that this might be dependent upon depressive symptoms. One could possibly construct a model for conditional correlation, but I would rather start with some visualization of the data (if you can post a link to data I can include one here).

You have only 170 patients, so the obvious idea of stratification (on depressive symptoms) is difficult to apply. But an extension of that idea to local correlation is possible, effectively using overlapping strata (via weights, as in local regression).

But I would start with visualization: a conditioning plot. There is an R function for that, coplot, and an example of use can be seen here: How do I create and interpret an interaction plot in ggplot2?

(the solution you propose yourself in the last paragraph do not give meaning: You cannot estimate the correlation for each patient (that makes $n=1$), but to estimate a local correlation is an extension/bettering of that idea. It is a variant on the idea of local regression)

We can show this as a conditioning plot: 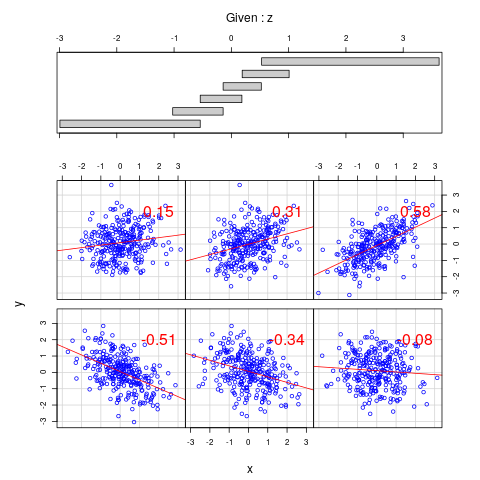 The plot should be read starting from the bottom left (order of increasing $z$). Overplotted is a regression line and the Pearson correlation in red. Code for the plot:

We can show with a hypothesis test that the data is not multinormal:

As a continuation, we could ask if we can formulate a statistical model to estimate a conditional correlation. I have only found explicit references to such ideas in the context of time series, see Dynamic Conditional Correlation (DCC) model yields unexpected sign of fitted correlations. But it is possible to define a model similar to generalized linear models. This is implemented in the R package VGAM (on CRAN), with the family function binormal(). But so far I didn't try it, and will not give examples here. (VGAM can still give the feeling of an experimental, very ambitious project).

Not the answer you're looking for? Browse other questions tagged regression correlation multiple-regression data-visualization interaction or ask your own question.

7
How do I create and interpret an interaction plot in ggplot2?
6
When are correlated Normal random variables multivariate Normal?
4
Dynamic Conditional Correlation (DCC) model yields unexpected sign of fitted correlations
2
test for increasing correlation over time
4
How to check if two variables are dependent given a third variable?
3
How to test if a correlation between two variables has changed significantly over time?
3
Testing if the strength a correlation is moderated by a continuous variable
3
How can I estimate the confidence interval of correlations possibly dependend with time?
2
Investigate correlation conditional on a threshold
2
How can I create a scatterplot in R using the plot function to control for covariates?
See more linked questions

7
"Correlation" terminology in time series analysis
3
Under what conditions does correlation imply proximity to causation?
1
Why reversing a continuous measure leads to a non-significant correlation coefficient
1
Derivation of pair-wise relationships expression of βyx.z and σyx.z