I am trying to apply a statistical test to data in my science fair project. I'm looking for suggestions on which test I should use. The graph is shown below the text.

I am studying the effect of a specific chemical on microbial fuel cells. I have two study groups--control and variable--that I want to compare. I would like to know if these groups respond differently to a specific stimulus. Specifically, I want to see if there is any defined response to the stimulus, such as a logarithmic increase/decrease in my outcome variable, differential voltage.

Here are the variables that I have:

Preliminary analysis shows that my data have an extremely high variance within small amounts of time and raw data looks fuzzy on a computer screen (line graph—differential voltage on the y-axis and time on the x-axis, two sets of data—control and variable—represented as two separate lines on the graph)

I would like to know which statistical test to use to find out whether: 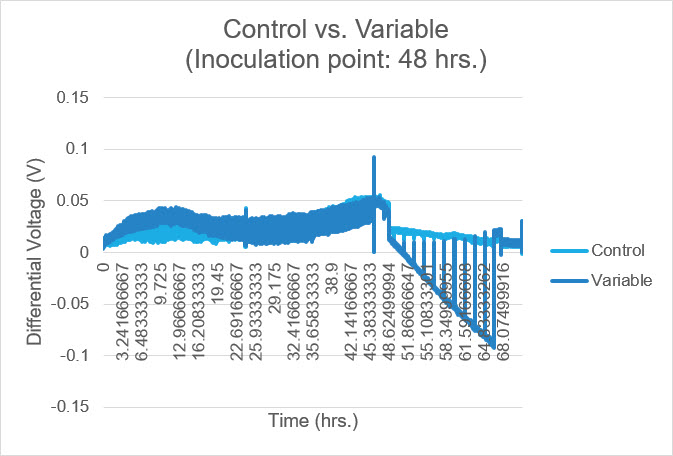 1) The chemical was added once at 48 hours; I think that the activity in between 64 and 68 hours is related to the spikes because the chemical was added to the fuel cells over the cathode. The cathode of each microbial fuel cell that I used in the experiment was a porous carbon pad electrode. Because typical data in biological processes is non-linear, I've been thinking that the linear decrease could be due to the increasing resistance in between microbes and the cathode wire as the chemical seeped through the pad (the wire was inside of the cathode pad). The spikes are very interesting because they appear to not be the noise. The linear decrease between 48 and 68 may be the noise because it may have been caused by the physical seeping of the chemical through the cathode, whereas I am trying to focus on the biological aspect of the data. Those spikes are very interesting to me because, if every negative data point were to be removed, then those points would very much resemble a biological process. I infer that the differential voltage increase that returns the variable back to the control between 64 and 68 is due to the increasing current being generated by microbes in the fuel cell, which indicates the microbial population, or biofilm, adapting to the chemical that was added (current is proportional to voltage because the differential voltage was measured across a 200-ohm resistor).

3) The return of the values back to those of the control at 65 hours was due to either the depletion of the chemical or the adaptation of the culture to degrade it.

Again, those were really good questions. Thank you!

Any pointers as to which specific test I should focus on would help this project so much. A few test that I have been looking at are:

But I don't know which one to focus on or if I am going in the right general direction. Which one do you think would work? Or if you have a recommendation that isn't on the list, what would that be?