What's the relationship between initial eigenvalues and sums of squared loadings in factor analysis?

On the one hand I read in a comment here that:

On the other hand, I sometimes read in books people saying things like:

That text is from Field (2013) Discovering statistics using IBM SPSS, and this diagram accompanies it. 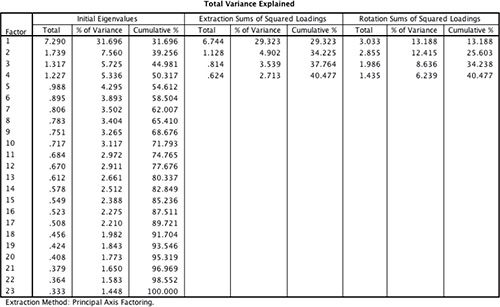 The two citations do not generally contradict each other and both look to me correct. The only underwork is in Perhaps you mean sum of squared loadings for a principal component, after rotation one should better drop word "principal" since rotated components or factors are not "principal" anymore, to be rigorous. Also (important!) the second citation is correct only when "factor analysis" is actually PCA method (like it is in SPSS by default) and so factors are just principal components. But the table you present is not after PCA, and I wonder whether they are from the same text and wasn't there some misprint.

In the extraction summary table you display there was 23 variables analyzed. Eigenvalues of their correlation matrix are shown in the left section "Initial eigenvalues". No factors have been extracted yet. These eigenvalues correspond to the variances of Principal components (i.e. PCA was performed), not of factors. Adjective "initial" means "at the initiation point of the analysis" and does not imply that there must be some "final" eigenvalues.

Extraction of them was done by Principal axis method and the matrix of loadings obtained. Sums of squared loadings in the matrix columns are the factors' variances after extraction. These values appear in the middle section of your table.

These numbers, generally, should not be called eigenvalues because factor extractions not necessarily are based right on the eigendecomposition of the input data - they are specific algorithms on their own. Even Principal axis method which does involve eigenvalues deal with eigenvalues of a repeatedly "trained" matrix, not an original correlation matrix.

But if you had been doing PCA instead of FA then the 4 numbers in the middle column would have been the 4 first eigenvalues identical to the 4 largest ones on the left: in PCA, no fitting take place and the extracted "latent variables" are the PCs themselves, which eigenvalues are their variances.

In the right section, sums of squared loading after rotaion of the factors are shown. The variances of these new, rotated factors. Please read more about rotated factors (or components), especially footnote 4, and that they are neither "principal" anymore nor this-one-to-that-one correspondent to the extracted ones. After rotation, "2nd" factor, for example, is not "2nd extracted factor, rotated". And it also could have greater variance than the "1st" one.

Not the answer you're looking for? Browse other questions tagged pca spss factor-analysis eigenvalues factor-rotation or ask your own question.

1
How do I make sense between difference in Eigenvalue variance and extracted some of squares variance?
64
Is PCA followed by a rotation (such as varimax) still PCA?
37
How does Factor Analysis explain the covariance while PCA explains the variance?
29
Best factor extraction methods in factor analysis
34
What is the intuitive reason behind doing rotations in Factor Analysis/PCA & how to select appropriate rotation?
5
Estimating specific variance for items in factor analysis - how to achieve the theoretical maximum?
6
Can I somehow compute variance explained by PC after Oblique rotation in PCA?
2
Calculating variance explained by factors after exploratory factor analysis with oblique rotation in R
0
What are eigenvalues and eigenvectors in factor analysis?
3
How to create a scree plot for factor analysis given that eigenvalues depend on the number of extracted factors?
See more linked questions