If I switch the role of the variables as in (x ~ y), however, and then rewrite the result for $y$ to be a function of $x$, the resulting slope is always steeper (either more negative or more positive) than that estimated by the y ~ x regression. I'm trying to understand exactly why that is and would appreciate it if anyone could give me an intuition as to what's going on there.

Just to illustrate Dilip’s answer: on the following pictures,

If there is no natural way to chose a "response" and a "covariate", but rather the two variables are interdependent you may wish to conserve a symmetrical role for $y$ and $x$; in this case you can use "least rectangles regression."

Here is an illustration with the same data points, for each point, a "rectangle" is computed as the product of the length of two red segments, and the sum of rectangles is minimized. I don’t know much about the properties of this regression and I don’t find much with google. 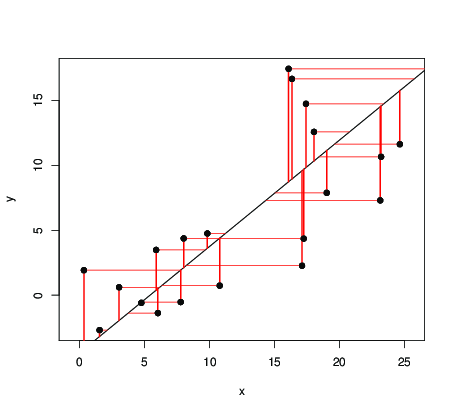 Regression line is not (always) the same as true relationship

you can relate the slopes as following:

So the slopes are not each other inverse.

The reason is that

If two variables $X$ and $Y$ relate to each other by some (causal) linear relationship $$Y = \text{a little bit of $X + $ a lot of error}$$ Then you can imagine that it would not be good to entirely reverse that relationship in case you wish to express $X$ based on a given value of $Y$.

it would be better to also use

So you can see the variable Y as being a part $\rho X$ and a part noise with variance $1-\rho^2$. The same is true the other way around.

A simple way to look at this is to note that, if for the true model $y=\alpha+\beta x+\epsilon$, you run two regressions:

So whether you get a steeper slope or not just depends on the ratio $\frac{var(y)}{var(x)}$. This ratio is equal to, based on the assumed true model:

Link with other answers

It becomes interesting when there is also noise on your inputs (which we could argue is always the case, no command or observation is ever perfect).

I have built some simulations to observe the phenomenon, based on a simple linear relationship $x = y$, with Gaussian noise on both x and y. I generated the observations as follows (python code): 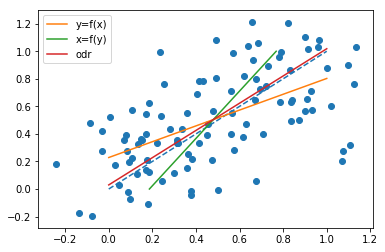 All the code is in there:

Simple linear regression of y ~ x gives you the 'best' possible model for predicting y given x. Hence, if you fit a model for x ~ y and algebraically inverted it, that model could at its very best do only as well as the model for y ~ x. But inverting a model fit for x ~ y will usually do worse at predicting y given x, compared to the 'optimal' y ~ x model, because the "inverted x ~ y model" was created to fulfill a different objective.

Imagine you have the following dataset:

When you run an OLS regression of y ~ x, you come up with the following model

This optimizes predictions of y by making the following predictions, which have associated errors:

The OLS regression's predictions are optimal in the sense that the sum of the values in the rightmost column (i.e. the sum of squares) is as small as can be.

When you run an OLS regression of x ~ y, you come up with a different model:

This optimizes predictions of x by making the following predictions, with associated errors.

Again, this is optimal in the sense that the sum of the values of the rightmost column are as small as possible (equal to 0.071).

This would give you the following predictions and associated errors:

The sum of the values in the rightmost column is 0.074, which is larger than the corresponding sum from the model you get from regressing x on y, i.e. the x ~ y model. In other words, the "inverted y ~ x model" is doing a worse job at predicting x than the OLS model of x ~ y.

3
OLS but accidentally swapping $X$ and $Y$ and calculating new parameters
1
Bivariate normal distribution , link $\Bbb E(Y\mid X=x)$ and $\Bbb E(X\mid Y=y)$
2
Given correlation and linear relationship between x and y find a linear relationship with the variables switchrd
0
Can the variables for a regression be replaced?
260
How would you explain covariance to someone who understands only the mean?
11
Why does the product of the bivariate regression coefficients of the $y$-on-$x$ line and $x$-on-$y$ line equal the square of the correlation?
7
Is the average of betas from Y ~ X and X ~ Y valid?
7
R-squared: X "explains" the percentage of variation of the Y values. Does axis order matter?
4
Ellipse region shape from bivariate normal distributed data?
2
Understanding intercept in simple linear regression and why one variable is a predictor and the other is an outcome variable
See more linked questions

8
Where is the explanatory effect of common variance among covariates accounted for in regression procedures?
6
How to read the Interaction effect in multiple linear regression with continuous regressors?
5
Practical limits to collinearity problems?
4
Provide a precise and concise statement on what a simple linear model is
5
Foundations behind Linear Regression / Statistical Modelling
3
What is the relationship between simply linear and multiple linear regression coefficients?
1
Correlation coefficient between a stochastic and non-stochastic variable or, what is the difference between a non-stochastic variable and a constant?