Is it appropriate to compare sports with different-length seasons using Gini?

I made this plot to try and compare the competitiveness of the major US sports (NHL/NBA/MLB/NFL): 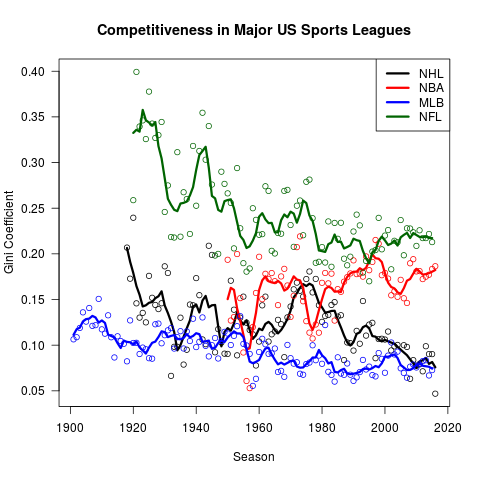 Each point of a given color represents, for a given season, the Gini coefficient of the win percentages in that league. So for example, the rightmost red circle is the Gini for the 2015-16 NBA season (as of yesterday). I calculate the win-loss percentage for each team in the league and feed this as data to ineq::Gini in R, which should be calculating the Gini as explained on Wikipedia.

There may be many criticisms for using the Gini as a measure of inequality, but my concern here stems from something more specific:

The NFL season has 16 games; the NHL & NBA seasons have 82 games; and the MLB season has 162 games. The curves (which, by the way, are 5-year moving averages of the Ginis) seem to match season length in levels, which has led me to wonder:

Is there something mechanical about a longer season leading to a lower level of the Gini coefficient in this context?

If this is indeed the case, is there any sort of bias correction that can be done to level the playing field and allow for fairer comparison across the sports?

Not sure---you could try to get at a data-based answer to your question, by taking the league with shortest season, and calculate the gini coefficient by pooling more and more seasons, and plotting the resulting gini coefficients against "pooled season length".

Not the answer you're looking for? Browse other questions tagged r modeling gini bias-correction or ask your own question.

1
Correcting for season-length bias of Gini on win percentage