How it could be possible? and what does it mean?

I have checked my code and it works fine. Below is my data

and the line graph 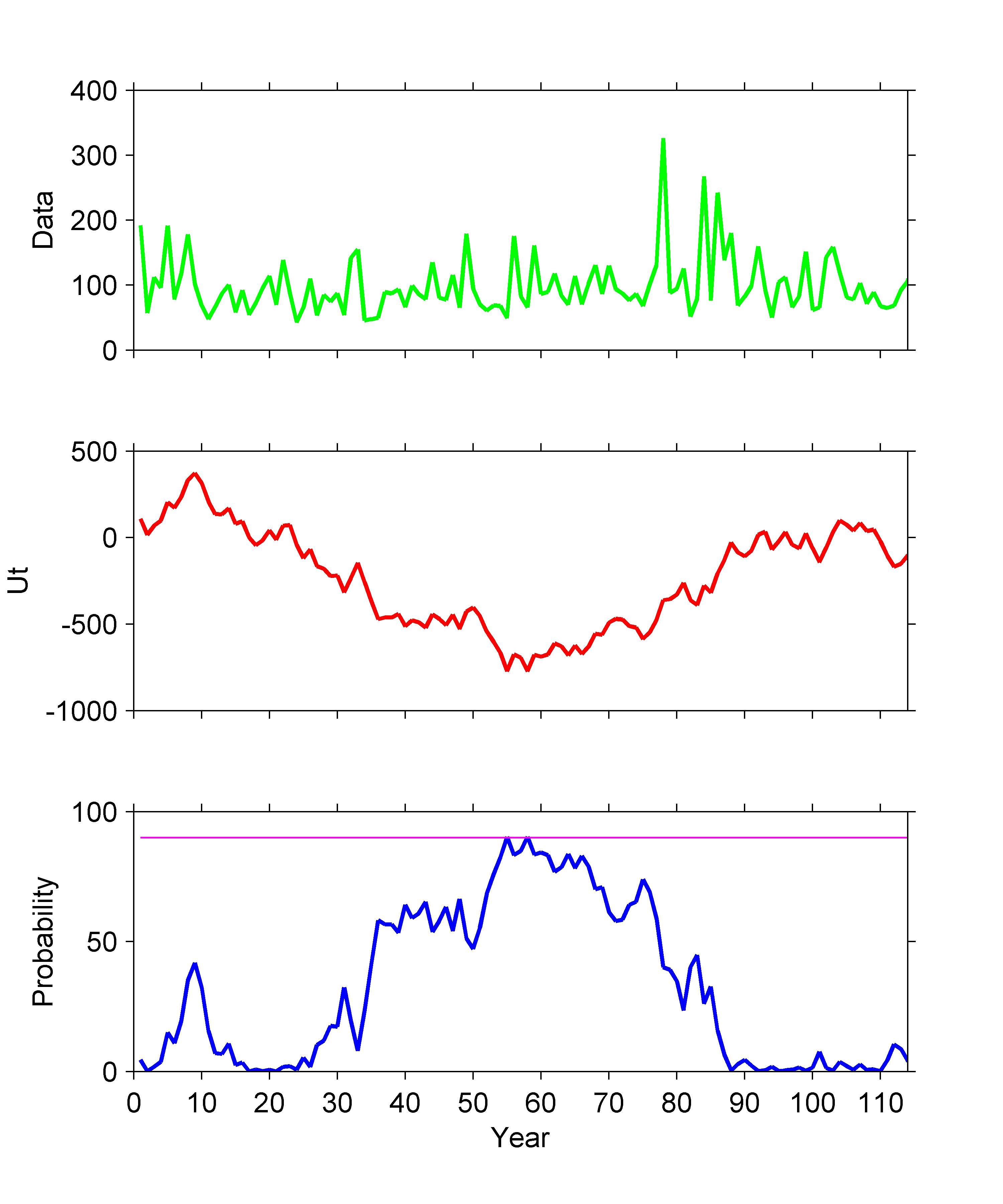 However, the slope is less negative post-1955 than pre-1955. What does this indicate, if I am doing it correctly.

The $U_t$ values are based on (centered) sums of ranks. They're integers, so they can be the same -- and indeed you do have two $U_t$ values the same.

However, it is not clear how you're assigning p-values to those $U_t$ values.

Pettitt's 1979 paper [1] does not assign p-values to every point; it effectively assigns a p-value to the largest $\mid U_t\mid $, because for continuous data it uses an asymptotic approximation - a scaled* version of $U_t$ is asymptotically a Brownian bridge - and so approximate p-values can be obtained from the Kolmogorov distribution (the limiting distribution of $K_n=\sqrt{n}D_n$ in a Kolmogorov-Smirnov test).

* the scale factor is a simple function of the number of observations.

It seems that you're calculating a p-value for every point by using Pettitt's calculation at equation 2.12 in the paper (a further approximation to the asymptotic approximation) for each time point as if each $\mid U_t\mid $ were the maximum -- but then only the p-value that goes with the largest $\mid U_t\mid $ value carries any meaning as a p-value. Which is to say, the only p-value there that you can interpret is the smallest one.

I'm not at all sure why a computer program would use equation 2.12 rather than actually just compute the Kolmogorov distribution to high accuracy (and so only have one level of approximation); 2.12 is designed for ease of hand calculation.

In addition, you describe the data as having a trend (from just the raw appearance of the plot of the data, I don't think there's clear evidence that it really does, outside the possible location-shift you're testing for, but sometimes trend can be hard to spot, so perhaps you have some other reason to think there is additional trend there); if there were such a trend the Pettitt test would not be valid.

Not the answer you're looking for? Browse other questions tagged trend wilcoxon-mann-whitney change-point or ask your own question.