Is it OK to superimpose two different point patterns? 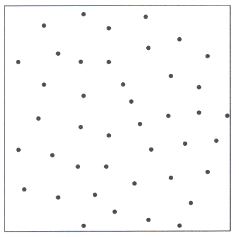 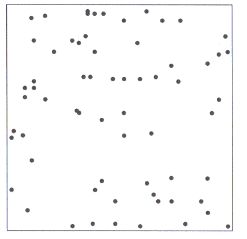 My question is- is it OK to scale one of the datasets to have the same coordinate range like the other? For example, I can divide Pine in 5.7 each coordinate and then present it as a different series in Excel scatter plot. Will I be losing ratio? Has anyone compared dataset in this way previously?

You can define the mean centre as given by the means for each of two coordinates, Cartesian or (with more care) latitude and longitude. That is an easy calculation.

Such centres are especially commonly used in demography. There is some information, and even some entertainment, in calculating the mean centre of a country's population (which usually turns out to be somewhere which otherwise is of interest only to people who live nearby) and in tracking changes in that centre over time.

I can't tell how much sense it would make here.

Descriptively, and more generally, clustering in part of a map might be shown by the mean centre of a pattern not being the centre of the map itself. Even if this is quantifying the obvious, it may still be useful.

Mean centres have the limitations of any mean. For example, it is easy to imagine different distributions with the same mean centre or distributions for which the mean centre is an awkward or inadequate summary. But so long as you think about the patterns by looking at maps or plots, this is always something you can do. As always, the mean, median and mode do not in general coincide, so watch out if you really want something else.

Not the answer you're looking for? Browse other questions tagged spatial or ask your own question.