This is my first attempt for somebody coming from the frequentist camp to do Bayesian data analysis. I read a number of tutorials and few chapters from Bayesian Data Analysis by A. Gelman.

As the first more or less independent data analysis example I picked is train waiting times. I asked myself: what is the distribution of the waiting times?

The dataset was provided on on a blog and was analyzed slightly differently and outside PyMC.

My goal is to estimate the expected train wait times given those 19 data entries.

The model I built is the following:

where $\hat\mu$ is data mean and $\hat\sigma$ is data standard deviation multiplied by 1000.

I have a bunch of questions 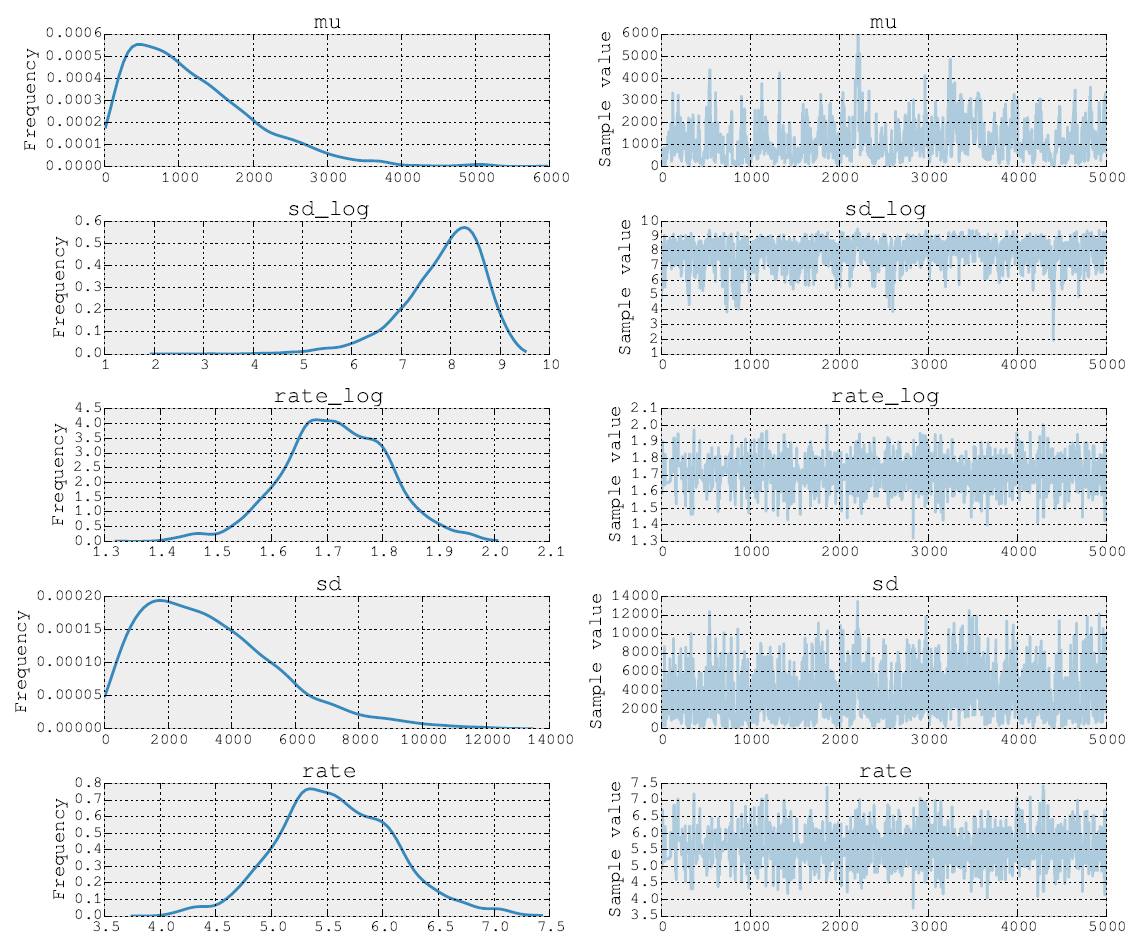 I can post the source code as well. In model fitting stage I do the steps for parameters $\mu$ and $\sigma$ using NUTS. Then in the second step I do Metropolis for the rate parameter $\rho$. Finally I plot the trace using the inbuilt tools.

I would be very grateful for any remarks and comments that would enable me to grasp more probabilistic programming. May be there are more classic examples that are worth experimenting with?

Here is the code I wrote in Python using PyMC3. The data file can be found here.

I will tell you first what I would do and then I'll answer the specific questions you had.

What I would do (at least initially)

Here is what I gather from your post, you have training waiting times for 19 observations and you are interested in inference about the expected waiting time.

I will define $W_i$ for $i=1,\ldots,19$ to be the waiting time for train $i$. I see no reason that these waiting times should be integers, so I will assume they are positive continuous quantities, i.e. $W_i\in\mathbb{R}^+$. I'm assuming all the waiting times are actually observed.

There are several possible model assumptions that could be used and with 19 observations it may be hard to determine which model is more reasonable. Some examples are log-normal, gamma, exponential, Weibull.

As a first model, I would suggest modeling $Y_i=\log(W_i)$ and then assume $$ Y_i \stackrel{ind}{\sim} N(\mu,\sigma^2). $$ With this choice, you have access to wealth of the normal theory that exists, e.g. a conjugate prior. The conjugate prior is a normal-inverse-gamma distribution, i.e. $$ \mu|\sigma^2 \sim N(m,\sigma^2 C) \quad \sigma^2 \sim IG(a,b) $$ where $IG$ is the inverse gamma distribution. Alternatively, you could use the default prior $p(\mu,\sigma^2)\propto 1/\sigma^2$ in which case the posterior is also a normal-inverse-gamma distribution.

Since $E[W_i] = e^{\mu+\sigma^/2}$, we can answer questions about the expected waiting time by drawing joint samples of $\mu$ and $\sigma^2$ from their posterior distribution, which is a normal-inverse-gamma distribution, and then calculating $e^{\mu+\sigma^/2}$ for each of these samples. This samples from the posterior for the expected waiting time.

A Poisson does not seem appropriate for data that could be non-integer valued. You only have a single $\lambda$ and therefore you cannot learn the parameters of the gamma distribution you have assigned to $\lambda$. Another way to say this is that you have built a hierarchical model, but there is no hierarchical structure in the data.

Also, it will really help if your math and your code agree, e.g. where is $\lambda$ in your MCMC results? what is sd and rate in your code?

Your prior should not depend on the data.

Yes and it should. See my modeling approach.

I believe you want a posterior predictive distribution. For each iteration in your MCMC, you plug in the parameter values for that iteration and take a sample.

Not the answer you're looking for? Browse other questions tagged bayesian pymc or ask your own question.