Does the F-test for multivariable regression work with non-normal residuals but large sample size?

Suppose I am building a multiple regression model, perhaps with 5 explanatory variables. Suppose the residuals are not normally distributed (based on a Q-Q plot and a D'Agostino test, due to kurtosis). Suppose I have a sample size in the neighborhood of 100: small enough that I can trust the D'Agostino test to be telling me about a significant departure from normality, but large enough that I can lean on the Central Limit Theorem.

This is claimed by Wooldridge on page 176 of his Introductory Econometrics book (4th edition). Wooldridge is usually fairly careful and gives theoretical justifications, but does not in this case. I am a mathematician, so I'd like to understand why the F-statistic should be F-distributed in this setting. I know that the t-statistics for the individual explanatory variables (assuming no multicollinearity) are approximately normally distributed by the Central Limit Theorem. I know that I can do a randomization based test and build an empirical distribution for the F-statistics, and it looks like an F-distribution. I just don't have a theoretical reason to believe it is one, and my students keep asking me this question. Thanks!

I am not entirely sure this answers your question, but here we go. Asymptotically, $q\times F$, with $F$ an F-distributed r.v. with $q$ "numerator degrees of freedom corresponding to the number of restrictions tested in the F-test, converges in distribution to a $\chi^2_q$ r.v. as the denominator degrees of freedom (a function of $n$, the sample size) tend to infinity.

The figure below shows that even for 25 denominator degrees of freedom, the approximation is already quite close, for $q=3$. 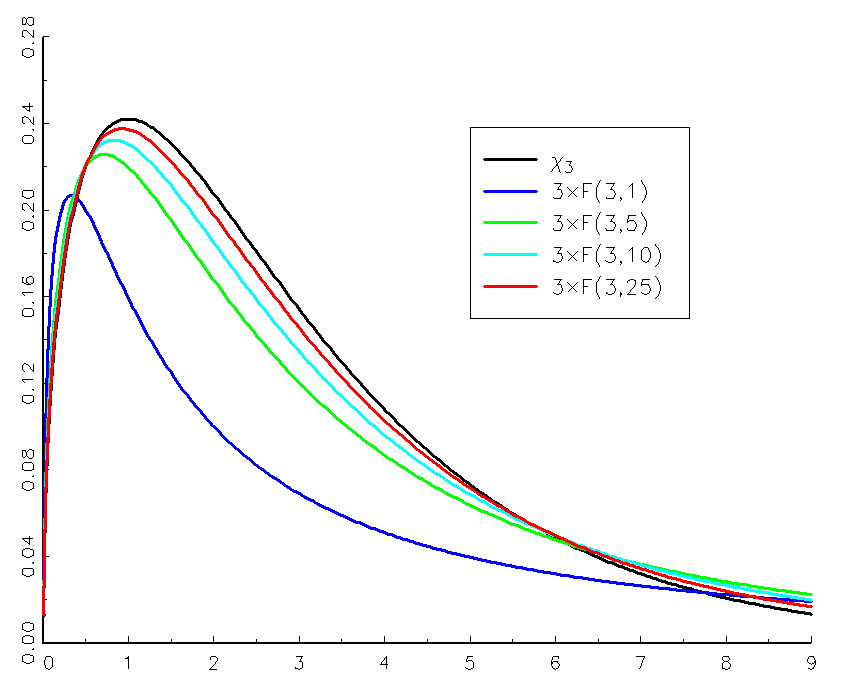 But for $n$ reasonably large, the approximation will be pretty good.

Not the answer you're looking for? Browse other questions tagged multiple-regression f-test f-distribution or ask your own question.

11
What is the power of the regression F test?
0
Large sample size and partial F-test for multiple regression makes adding a variable always significant
4
Is an F-test for equality of variance appropriate for a very large dataset?
4
Prediction interval with non normal data
4
Interpret if residuals are "close enough" to a normal distribution
1
Exploratory search for interactions in linear regression with normal distr. of residuals but non-normally distr. DV
1
For linear regression, if the theoretical coefficients and the variance of the error is known, is the theoretical R squared value, F statistic known?