The appendix of the paper of McPherson et al (1982) (see screenshot below) contains a derivation of the Systematic Component of Variation (SCV). I understand the derivation with exception of the first step. Here are the premises:

Now the following assumptions have been made:

$O_i$ is approximately Poisson distributed with mean $\lambda_iE_i$
$\lambda_i$ is considered as a random variable with expected value $1$ and variance $\sigma^2$.

From these the following formula is concluded:

I tried to find out how to get the formula by the given premises and assumptions and didn't succeed. Any idea? 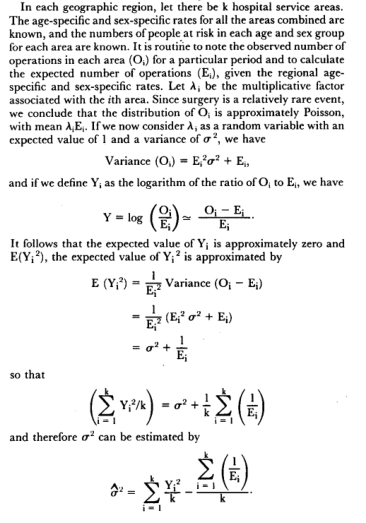 This is simply the law of total variance: https://en.wikipedia.org/wiki/Law_of_total_variance

$E_i$ is a known constant

0
Which variables have too much variation?
1
Best estimate of variation for duplicate data?
2
Jitter/Variation in normal distribution
16
Statistical variation in two Formula 1 qualifying formats
1
Total Variation Distance Uniform Distribution
1
Variance vs Variation
4
If $|E(X)|< 1$ and $E(X^2)<1$, can we have $1 - E(X^2) = (1 - E(X))^2$?