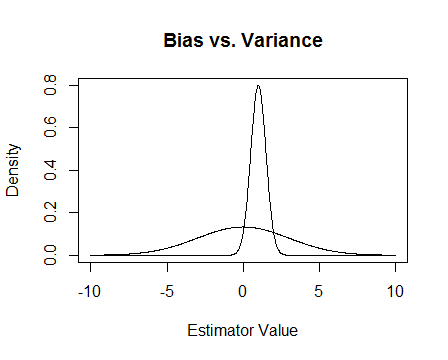 This paper [1] gives a simple example demostrating that a biased estimator can even achieve a lower variance than the Cramér–Rao bound (CRB).

The other examples in this thread are fantastic, but I wanted to provide an extremely simple example that illustrates that a biased estimator can sometimes have drastically smaller variance.

This estimator is intuitive and it is unbiased, but it is an estimator with relatively large variance.

The MSE of the second estimator tends to zero much faster than the first estimator. This example shows that bias should not be the only thing we consider when choosing an estimator.

The takeaway here, again, is that bias and variance are two separate quantities which we would like to minimize. Often reducing one metric leads to an increase in the other. An estimator should be chosen with this tradeoff in mind. MSE is a popular (but certainly not the only) metric which takes this tradeoff into account.

Not the answer you're looking for? Browse other questions tagged mathematical-statistics bias estimators unbiased-estimator bias-variance-tradeoff or ask your own question.

15
Are there parameters where a biased estimator is considered "better" than the unbiased estimator?
3
When are biased estimators with lower MSE preferred?
58
Why does shrinkage work?
12
How does one explain what an unbiased estimator is to a layperson?
9
Quick test of quality of an econometrics textbook
18
When was the word "bias" coined to mean $\mathbb{E}[\hat{\theta}-\theta]$?
10
Statistical Learning. Contradictions?
4
Interpretation of Elastic Net Regression Coefficients
2
Lasso predictive equations