Why is the QQ Plot for Normal Distribution a Straight Line?

Pardon my basic question on this, but I could not find why the QQ Plot for normal distribution is a straight line.

Also, according to the accepted answer here: Percentile vs quantile vs quartile quantiles are in the range [0,1], but QQ plots shows quantiles that are clearly outside the [0, 1] range. Here is one I made in R: 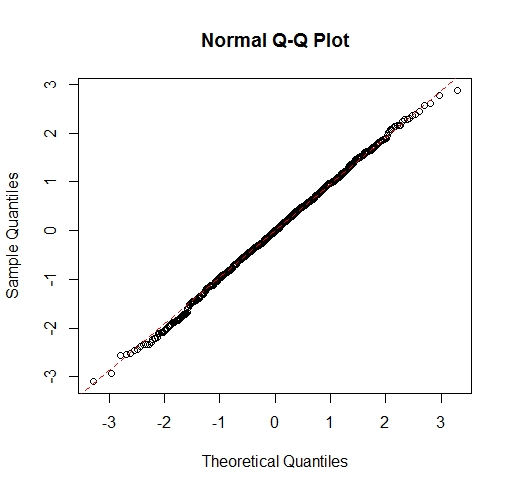 Why is the QQ Plot for Normal Distribution a Straight Line?

The values on the y-axis are the sorted data values (the order statistics).

Also, according to the accepted answer here: Percentile vs quantile vs quartile quantiles are in the range [0,1], but QQ plots shows quantiles that are clearly outside the [0, 1] range.

The answers there are worded in a way that it might mislead you. The quantile function takes values between 0 and 1 as its argument, and produces values on the range taken by the original random variable or sample (depending on whether it's population or sample quantiles under discussion).

In answer to your second question note that the scale on the figure shown is number of std deviations from the mean, which has no upper or lower bound. If the scale related to proportion of observations, then the scale would be defined to be between 0 and 1 (or 0% and 100%), and the frequency of observations would not peter out at either end: instead it would be constant. For example, try amending your code to increase the number of random samples e.g. change x <- rnorm(1000) to x <- rnorm(10000), and the axes will adjust to include the 4th standard deviation.

Not the answer you're looking for? Browse other questions tagged normal-distribution data-visualization quantiles qq-plot or ask your own question.