I'm having some difficulty in understanding the interpretation of the 2 sample KS test, and how it is different from a regular t test between 2 groups. 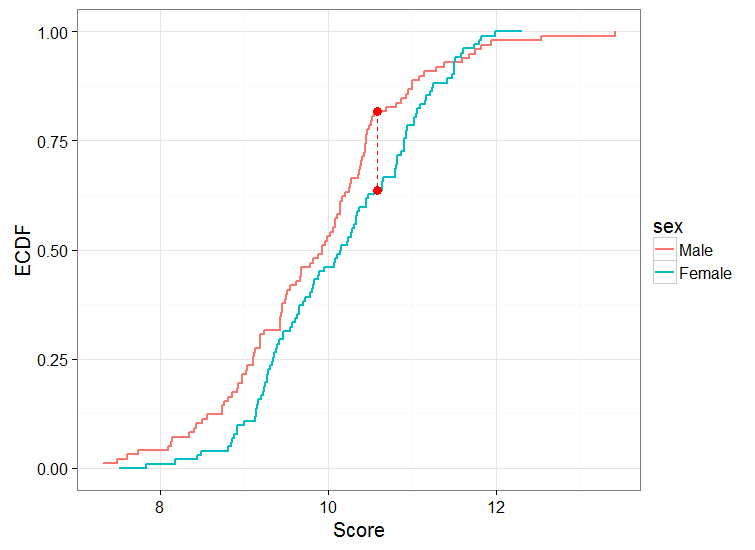 More specifically, males tend to have a higher probability of achieving lower scores on this task, and that is the difference between the 2 sexes as I interpret from the plot

Now a t test will test the difference between male and female means on the score variable.

If the t test comes out to be significant, I would conclude that females score, on average, significantly higher than males. Or in population terms, female scores are drawn from a population whose mean is higher than the male population, which sounds very similar to the KS conclusion that they come from different populations.

So the conclusion I would draw in both the KS and t test cases are the same. Males perform poorly relative to females. So what is the benefit of using one test over the other? Is there any new knowledge that you can gain from using the KS test?

The way I see it, males with a distribution centered around a low mean, and females centering around a high mean is what causes the significant t test. But by that very same fact, males will have a higher probability of scoring lower values, which would cause the plot to look like above and giving a significant KS test. So the results of both tests have the same underlying cause, but maybe one could argue that a KS test takes into account more than just the means of the distributions and also considers the shape of the distribution, but is it possible to parse out the cause of the significant KS test from just the test results?

So what is the value in running a KS test over a t test? And lets assume that I can meet the assumptions of the t test for this question

As an example of why you'd want to use the two sample Kolmogorov-Smirnov test:

Imagine that the population means were similar but the variances were very different. The Kolmogorov-Smirnov test could pick this difference up but the t-test cannot.

Or imagine that the distributions have similar means and sd's but the males have a bimodal distribution (red) while the females (blue) don't: 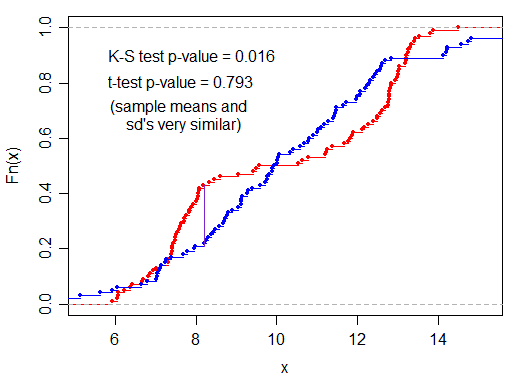 Do males and females perform differently? Yes -- the males tend to either score somewhere around 7.5-8 or 12.5-13, while the females tend more often to score more toward the middle (near 10 or so) but are much less clustered about that value than the two values the males tend to score near to.

So the Kolmogorov-Smirnov can find much more general kinds of difference in distribution than the t-test can.

Not the answer you're looking for? Browse other questions tagged distributions t-test interpretation kolmogorov-smirnov or ask your own question.