In the latent Dirichlet allocation model described in Wikipedia, is $\beta$ the word-topic matrix?

I understand that $\beta$ is the topic-word matrix and that $\beta_{ij}$ contains the probability of word $i$ given topic $j$, but I would like to confirm it.

Confusingly, the variables in Wikipedia's description of smoothed LDA don't follow the paper introducing LDA. In the paper, $\beta$ is first described exactly as you've described it:

Here's the plate notation from the paper: 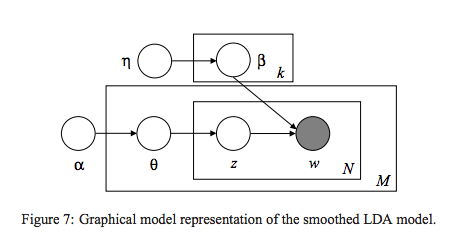 I'm not sure which is more common in implementations. For example, scikit-learn uses $\eta$ for the prior.

Not the answer you're looking for? Browse other questions tagged machine-learning unsupervised-learning latent-variable topic-models or ask your own question.