Not that strong in statistics, so I need a little help getting started with some data I've gathered.

In my experiment subjects had to perform tasks while I took time for them to complete it. Now, I want to do some t-testing based on various parameters, but.. My data ranges from 0 to 60 seconds. The experiment stopped at 60 seconds, so about 7-8 % of the data is '60'. Same amount around 0 seconds. Rest is highly skewed towards right with an overall mean time at 16,89 seconds.

So my question is: Can I do a t-test on this, when the data is so skewed? If not: What test can I do to check if groups/parameters has an effect?

I also have two different groups with an assumption that they're different (p < 0.05), but same problem again. The data is not normalized.

Could a Mann-Whitney U test be suitable for this?

I've attached a picture of the histogram. X-values is time, Y-values frequency. 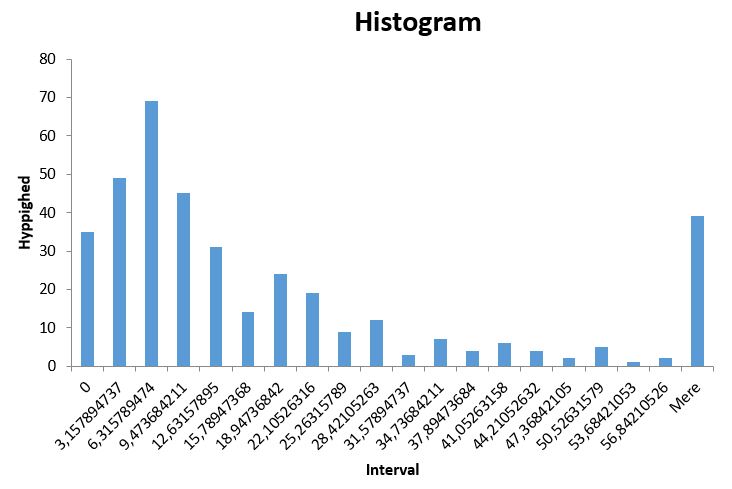 I've tried to do a log10 transformation. Before that I removed the 60's, since those are not actual times of completion. When I do the log10 then the first group (sample size ~380) is somewhat normalized:

But the group for which I try to do the t-test is not (sample size 52):

The two-tailed t-test of difference in variance gives a p-value much lower than 0.05. But can I count on this being correct on a log10 with only one of the samples being "normalized" ?

I've done the wilcox.test (Mann-Whitney-Wilcoxon test) in R and i get the following results:

What's the difference between rank and signed?

This is basically a failure time model. Subjects who did not complete the task by 60 seconds are right-censored (you know it took them longer than 60 seconds to finish but you do not know how long it would have taken them).

Not the answer you're looking for? Browse other questions tagged t-test skewness or ask your own question.

3
Mann-Whitney for non-normal distributions with n>20?
2
Test for comparing highly skewed charge data
2
Comparisons on nonparametic, unequal variance data
5
What test should I use for two groups of different number of measurements and low number of samples?
3
Non-parametric equivalent of the 1-sample t-test (not paired)
0
Under what circumstances does Mann-Whitney and Wilcoxon signed-rank test fail?
1
Which statistical analysis should I perform if the data sets are not normally distributed?
2
Ranked t-test or Mann-Whitney U test for commerical A/B testing
1
Statistical Test to Compare Count Data