Is there an error in this published Chi-squared table?

I am questionning the Chi-squared table given in 100 Statistical Tests (3rd Edition, 2006) by Gopal K. Kanji, reproduced in part below. 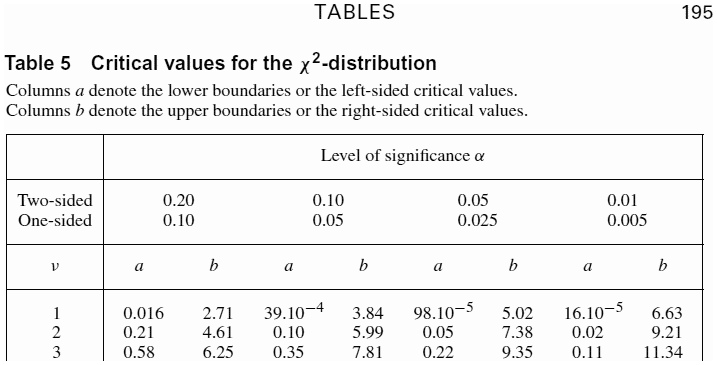 Specifically, I think the Two-sided and One-sided levels of significance on the right should be 0.02 and 0.01, instead of 0.01 and 0.005 (regaining consistency with the values below, as well as making the progression from left ot right more regular).

Can somemone give an independent confirmation? (Edit: that is now done in comments).

Can somemone with access to the 1995 edition tell if the table is similar? (Edit: That reference is used in W. Killmann, W. Schindler, A proposal for: Functionality classes for random number generators, Version 2.0, September 18, 2011 (part of AIS-31 at BSI), and in this context the rightmost column in that Chi-squared table is relevant).

Browse other questions tagged hypothesis-testing references chi-squared or ask your own question.