My study has a complicated design and I am not sure if I am modeling my zero-inflated data correctly. I have seed abundances and seedling abundances for 11 species. I have one main "treatment" with four levels (C, P, I, R). For the sampling design: we sampled at 5 sites. At each site, each of the 4 treatments were replicated 4 times (e.g. PA, PB, PC, PD). So there are 4 replicates of 4 treatments nested in 5 sites (so Site is my random factor). The response variable (one species' seed abundances) are zero-inflated (count data). I checked for overdispersion by running a glm and dividing the residual deviance by the degrees of freedom (I believe this is the right approach?). All variables were overdispersed (ratio greater than 1); so I went with negative binomial, instead of Poisson, distributions. I've tried two ways of modeling this: zeroinfl and glmmadmb. But after learning zeroinfl is not useful for mixed models, I am trying to model with glmmADMB: 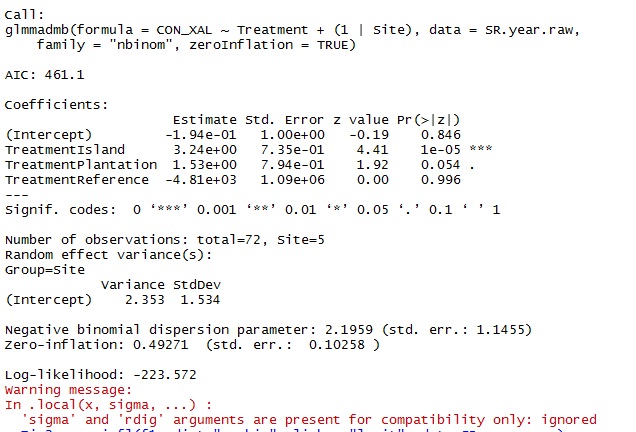 Summary of my response variable:

Not the answer you're looking for? Browse other questions tagged mixed-model negative-binomial-distribution glmm zero-inflation or ask your own question.

7
Experimental design & questions on use of generalized linear models
0
Generalized linear model with random effects for skewed data
3
Zero-inflated Poisson regression: how can I calculate contrasts for BACI (Before-after-control-impact) experiment?
0
Mixed effects model with random and nested effects in lmer
2
What approach can I use to analyse zero-inflated, overdispersed, count data with very low replicates and a nested random effect?
1
Trouble modeling zero-inflated data. Estimates and standard errors are off with GLM, GLMM, and ZI models
5
How can I run a Zero-Inflated Poisson/Negative Binomial Mixed Model with Gaussian Process