I have been reading up on gradient boosting machines, and in particular GBRT's. I've come across numerous mentions (and finally tracked down some papers) on applying these models to ranking problems - particularly in web search.

Is there any particular motivation for using GBRT's for ranking problems? I assume any classifier that outputs a probability could be used for ranking problems as well. Does the flexibility in choice of loss function motivate this choice? Or is it mainly that empirical results with GBRT's greatly outperform other methods? Any insight would be appreciated.

The Scikit learn documentation has an example of the "probability calibration" problem, which compares Logistic Regression's probability estimates against those from LinearSVC and NaiveBayes.

I added GBRT classifier to the matrix as well, and this is the corresponding graph, which shows that while the un-calibrated GBRT performs slighly poorer than Logistic Regression, the calibrated versions (using 2 different calibration methods) perform better.

Just from this experiment alone, it would be hard to make a case for GBRT over LR, however. 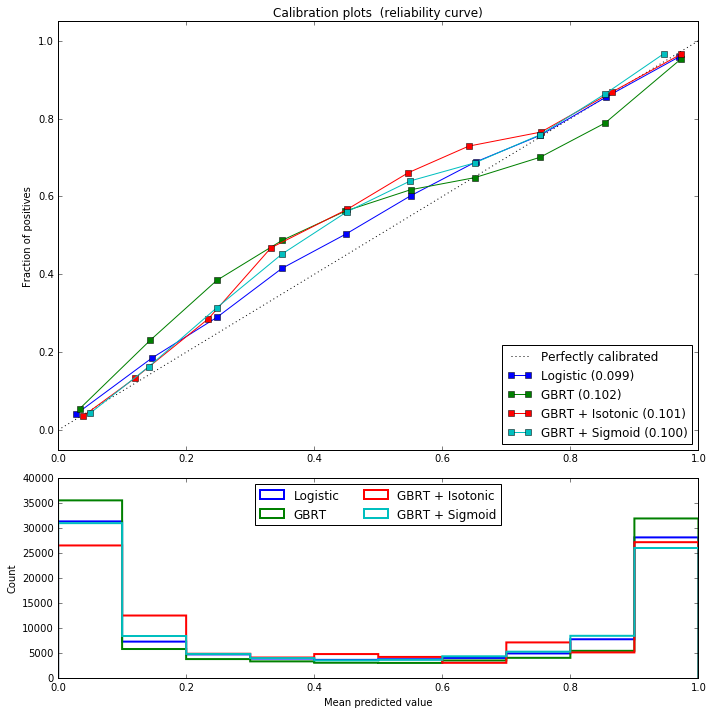 The source for my Gist which adds GBRT to the scikit-learn's original example.

Not the answer you're looking for? Browse other questions tagged machine-learning ranking boosting ensemble or ask your own question.