I also understand that for 2 dfs the Chi-squared distribution is just follows the distribution of the expected sum of two squared random samples from N(0,1), and has a significance threshold of approximately 6.0. Following the logic of the case with 1 df, in the case of 2 dfs we can also be expressed the threshold as the 97.5 percentile of a N(0, ~1.25) Normal distribution, which is about the square-root of 6.0.

Is there a general equation we can use to express a Chi-squared significance threshold (at say alpha = 0.05) for an arbitrary degrees of freedom (x), in terms of a Normal distribution with mean = 0 and standard deviation = y? I was only able to solve the above example for 2 dfs (i.e. x=2, y=1.25) though testing, but if there is some way to generalize this translation between Chi-squared and Normal, I think it would help me to gain more insights into the Chi-squared.

Following the logic of the case with 1 df, in the case of 2 dfs we can also be expressed the threshold as the 97.5 percentile of a N(0, ~1.25) Normal distribution, which is about the square-root of 6.0.

In the 1 df case it doesn't just match at the 97.5 percentile -- all of the percentiles correspond in a similar way.

While there's definitely a connection in the 1 df case, this is not really relevant for other degrees of freedom. How did you arrive at 1.25 (aside from matching its 97.5 quantile to $\sqrt{6}\,$)?

You could as easily say "well, see it's connected to a logistic distribution" and then compute the corresponding scale parameter for a logistic by matching two quantiles in a similar fashion. That doesn't imply they're related in any meaningful sense. 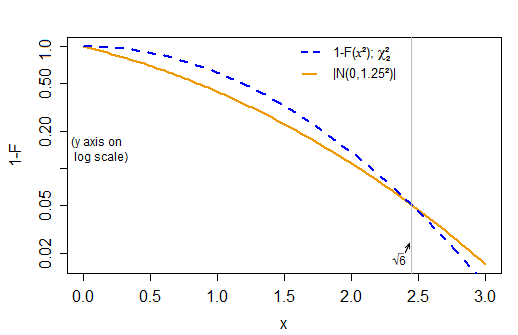 For the chi-squared(1), the two corresponding curves lie one atop the other, rather than just crossing somewhere.

The sum of two chi-squared(1) variates is exponential with mean 2. You can match any individual quantile to some normal distribution but you can't choose a single standard deviation that will make all the quantiles correspond at the same time like you can with 1.df

Not the answer you're looking for? Browse other questions tagged normal-distribution quantiles chi-squared-distribution or ask your own question.