At first I thought the order didn’t matter, but then I read about the gram-schmidt orthogonalization process for calculating multiple regression coefficients, and now I’m having second thoughts.

Ok, so I've been asked to clarify my question. So I've posted screenshots from the text that got me confused in the first place. Ok, here goes.

My understanding is that there are at least two options to calculate the regression coefficients. The first option is denoted (3.6) in the screenshot below. 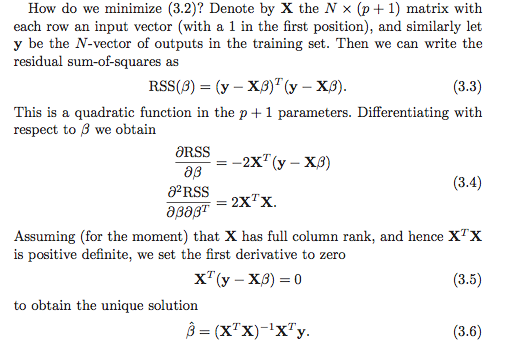 Here is the second option (I had to use multiple screenshots). 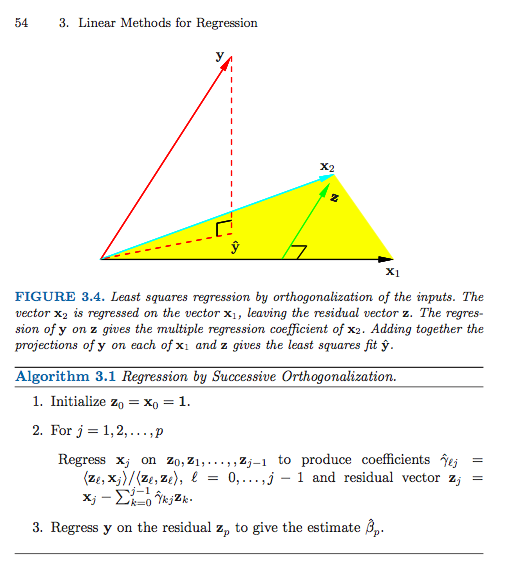 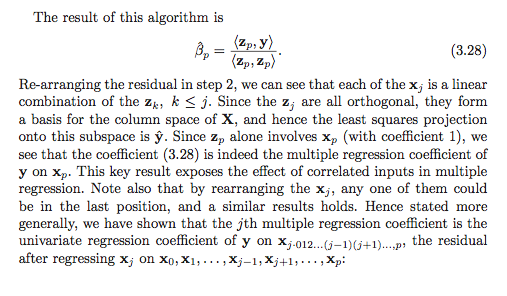 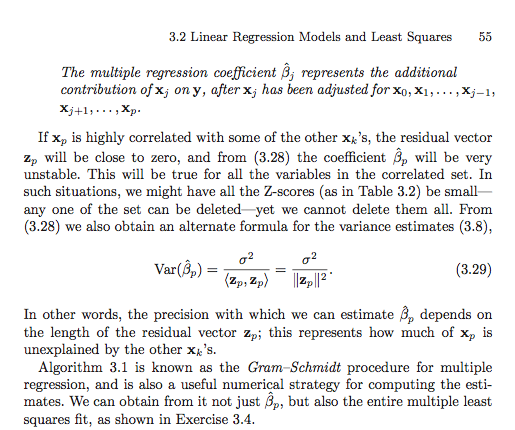 Unless I am misreading something (which is definitely possible), it seems that order matters in the second option. Does it matter in the first option? Why or why not? Or is my frame of reference so messed up that this isn't even a valid question? Also, is this all somehow related to Type I Sum of Squares vs Type II Sum of Squares?

Thanks so much in advance, I am so confused!

I believe the confusion may be arising from something a bit simpler, but it provides a nice opportunity to review some related matters.

The successive orthogonalization scheme (a form of Gram–Schmidt orthogonalization) is (almost) producing a pair of matrices $\newcommand{\Z}{\m{Z}}\newcommand{\G}{\m{G}}\Z$ and $\G$ such that $$ \m X = \Z \G \>, $$ where $\Z$ is $n \times p$ with orthonormal columns and $\G = (g_{ij})$ is $p \times p$ upper triangular. I say "almost" since the algorithm is only specifying $\Z$ up to the norms of the columns, which will not in general be one, but can be made to have unit norm by normalizing the columns and making a corresponding simple adjustment to the coordinate matrix $\G$.

Now, concentrate on the last row of the linear system. The only nonzero element of $\G$ in the last row is $g_{pp}$. So, we get that $$ g_{pp} \bhat_p = \langle \m y, \z_p \rangle \>. $$ It is not hard to see (verify this as a check of understanding!) that $g_{pp} = \|\z_p\|$ and so this yields the solution. (Caveat lector: I've used $\z_i$ already normalized to have unit norm, whereas in the book they have not. This accounts for the fact that the book has a squared norm in the denominator, whereas I only have the norm.)

The point in the section in ESL is that we could reorder the columns of $\m X$ to get a new matrix $\m X^{(r)}$ with the $r$th original column now being the last one. If we then apply Gram–Schmidt procedure on the new matrix, we get a new orthogonalization such that the solution for the original coefficient $\bhat_r$ is found by the simple solution above. This gives us an interpretation for the regression coefficient $\bhat_r$. It is a univariate regression of $\m y$ on the residual vector obtained by "regressing out" the remaining columns of the design matrix from $\m x_r$.

Householder reflections and Givens rotations provide more numerically stable approaches to this problem. Note that the above development does not change in the general case of QR decomposition. Namely, let $$ \m X = \m Q \m R \>, $$ be any QR decomposition of $\m X$. Then, using exactly the same reasoning and algebraic manipulations as above, we have that the least-squares solution $\bhat$ satisfies $$ \m R^T \m R \bhat = \m R^T \m Q^T \m y \>, $$ which simplifies to $$ \m R \bhat = \m Q^T \m y \> . $$ Since $\m R$ is upper-triangular, then the same backsubstitution technique works. We first solve for $\bhat_p$ and then work our way backwards from bottom to top. The choice for which QR decomposition algorithm to use generally hinges on controlling numerical instability and, from this perspective, Gram–Schmidt is generally not a competitive approach.

This notion of decomposing $\m X$ as an orthogonal matrix times something else can be generalized a little bit further as well to get a very general form for the fitted vector $\hat{\m y}$, but I fear this response has already become too long.

I had a look through the book and it looks like exercise 3.4 might be useful in understanding the concept of using GS to find all the regression coefficients $\beta_j$ (not just the final coefficient $\beta_p$ - so I typed up a solution. Hope this is useful.

Show how the vector of least square coefficients can be obtained from a single pass of the Gram-Schmidt procedure. Represent your solution in terms of the QR decomposition of $X$.

Why not try it and compare? Fit a set of regression coefficients, then change the order and fit them again and see if they differ (other than possible round-off error).

As @mpiktas points out it is not exactly clear what you are doing.

I can see using GS to solve for $B$ in the least squares equation $(x'x)B=(x'y)$. But then you would be doing the GS on the $(x'x)$ matrix, not the original data. In this case the coefficients should be the same (other than possible rounding error).

Not the answer you're looking for? Browse other questions tagged regression multiple-regression regression-coefficients or ask your own question.

1
Linear regression 3 variables formula for slope coefficient estimates
5
Interpreting orthogonality
8
Where is the explanatory effect of common variance among covariates accounted for in regression procedures?
2
Does the order of entering predictors in multiple regression model change the standardised Beta coefficients?
1
Numeric Functional Regression coefficients
1
What is the relationship of long and short regression when we have an intercept?
1
comparison of coefficients (they are not Standardized Beta ones)