Comparing and evaluating win probabilities in sports from different settings

Below is an image showing the win probability of the home team for two settings. Setting 1 uses two simple features while setting 2 uses the same two features plus four other features. The model I used in this case is Naive Bayes (with isotonic calibration). The four extra features seem relevant but ... 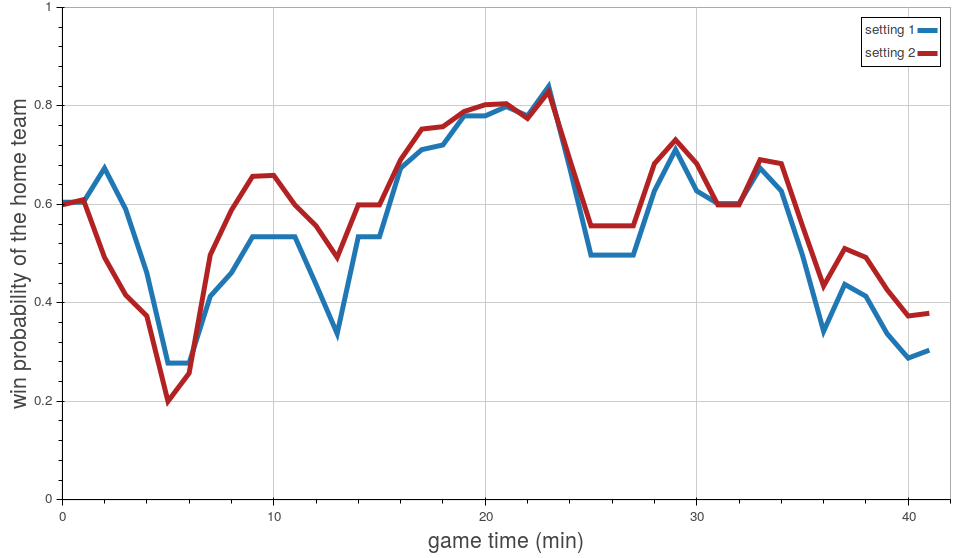 I don't know how to know/quantify whether using those four extra features has any impact on the quality of the predictions. This also applies for the other machine learning paradigms I used.

I'm struggling to find any information about this problem on the internet. Does anybody have an idea about evaluating such a series of win probabilities or have some paper about this subject I could read?

Interesting problem! If I understand correctly you need to assess the quality of both models and take the one that works best: with better predictive power.

With $y_g$ being the outcome of the game (0/1). If you think that the beginning or the middle of the game is more important than you can adjust those function as required.

Not the answer you're looking for? Browse other questions tagged machine-learning feature-selection model-comparison model-evaluation isotonic or ask your own question.

1
Machine Learning - What to Use as the "Correct Answer" for training purposes
8
why is adaboost predicting probabilities with so little standard deviation?
2
How to predict probabilities for a target variable?
0
Testing the validity of models for adjusting bookmaker odds into probabilities of real-world events
1
calibration of classifier scores: isotonic regression
2
Score-probability obtained from Random Forest
2
How to handle more than 1 categorical variable per row when training a model