probability self-study conditional-probability conditioning
share|cite|improve this question
edited May 2 '16 at 14:55

We may visualize these events in a two-dimensional Cartesian space whose coordinates are the values $X(\omega)$ and $Y(\omega)$, briefly written $(X,Y)$. In the first figure, the event $\mathcal{A}$ ($X$ is smaller than $Y$) is lightly shaded in gray and the event $\mathcal{E}$ (the smaller of $X$ and $Y$ is close to $u$) is darkly colored. 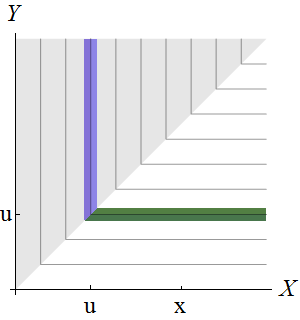 The series of gray lines are contours (level sets) of the function $(X,Y)\to\min(X,Y)$. They help us see that any event of the form "$\min(X,Y)$ is close to $u$" must be a slight thickening of the contour corresponding to $u$.

The blue colors (on the vertical arm of the colored vee shape) show us the intersection $\mathcal{A}\cap\mathcal{E}$. Visually--if we ignore the tiny detail at the very tip of the vee shape--this diagram is inviting us to compute $\Pr(X \lt Y\,|\,\min(X,Y)=u)$ as the vertical probability

relative to the total colored probability. This immediately gives us answers in many common cases, such as when $X$ and $Y$ have continuous distributions and are identically distributed. Then, the exchangeability of $X$ and $Y$ shows that the blue and green arms have the same chances and the continuity of their distributions shows we may ignore whatever might be happening where the arms meet, implying the conditional probability must be $1/2$ in that case.

To further illustrate, suppose (as in the question) that $X$ and $Y$ are independent with differentiable distribution functions $F_X$ and $F_Y$ having derivatives $f_X$ and $f_Y$. Then, up to a vanishingly small error associated with the point of the vee, the probability of the blue vertical arm is the product of probabilities associated with its base and its height:

with a comparable formula holding for the green horizontal arm (just swap the roles of $X$ and $Y$). The Mean Value Theorem allows us to approximate this by

Dividing by the total probability yields

In the first question, the event in question becomes 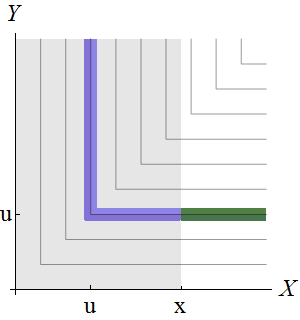 Such diagrams allow us quickly to draw useful conclusions. For instance, although you could have shown this algebraically before, it is now instantly obvious that this conditional probability must be zero whenever $x \lt u$: for sufficiently small $h$, the gray region and colored region would not intersect. It is just as obvious that the distribution function

will likely jump from zero to a positive value at $x=u$, because within the arbitrarily small range from $u-h$ to $u+h$ it includes all the (relative) probability of the vertical arm of the vee.

To say more, in any detail, would require additional information about the variables. Usually the principal technical concerns are whether $X$ and $Y$ have density functions and--if they do not--how the distinctions between $\lt$ and $\le$ are going to matter in computing the probabilities.

Note that this visualization works even when $X$ and $Y$ are not independent.

Your formula with the cdf inside the integral is probably wrong.

so you can use de Morgan's law to get the expression for $\min(X,Y)<u$ (you should be aware of it, because you have stated the formula for $F_U(y)$) and then use the distributivity property of union and intersection together with the fact that $P(A\cup B)=P(A)+P(B)-P(A\cap B)$ to arrive at the final expression for $F_{XU}(x,u)$.

This is not a complete solution, but it may clarify things a bit.

Not the answer you're looking for? Browse other questions tagged probability self-study conditional-probability conditioning or ask your own question.