Gaussian with a Gaussian mean

Sorry if the question is ill-phrased, but I'm pretty new to this and I have the following situation:

I know that samples X is drawn from a Gaussian Distribution G(u, v). Now that if u is substituted with another Gaussian random variable, what would this conjugate distribution be? Would it still be a Gaussian?

Just to make this more clear, given the following experiment:

I'm basically trying to get a clue on what the distribution of Ys is now, is it still Gaussian, what would the mean and var be?

Aaron's demo in his answer is pretty clear. Although in my study, I do tend to use pretty large n and m, per my own experiments, the shape of binning on the resulting points is still pretty Gaussian-like, it got me wondering again if there's theoretical proof behind that given large n and m, it is guaranteed to be Gaussian?

Here's a graph from one of my experiments (I ran it multiple times with different mean and variance, they all look similar): 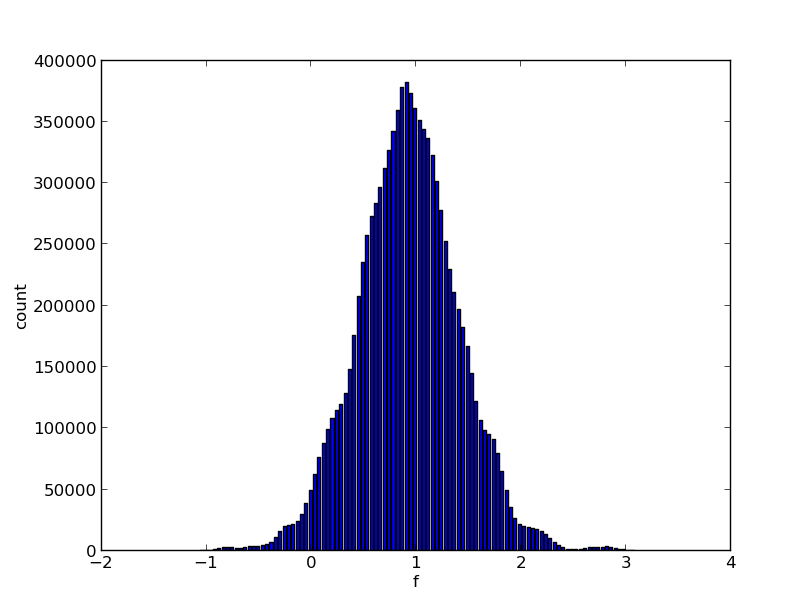 Yes (assuming they are independent). Changing the mean of a variable from $0$ to $x$ is equivalent to adding $x$ to that variable by linearity of expectation. And if $x$ is normally distributed, the addition of two independent normal variables is still normal.

which is still normal.

If they are dependent, then I don't believe we can conclude very much about the resulting distribution.

For $m > 1$, each of the $m$ "subsamples" depends on the same realization $x_i$. You can think of this as $n$ separate normal distributions, each shifted by amounts that are normally distributed after being sampled $m$ times. There may not be any nicer description, but this depends on what you want to analyze and what questions you want to answer about the resulting distribution. Also note that depending on the relative sizes of $n$ and $m$ (e.g. if $m$ tends to infinity while $n$ stays constant, or $n$ tends to infinity while $m$ stays constant) or the relative sizes of $\sigma_1^2$ and $\sigma_2^2$, you may be able to come up with a suitable approximation. 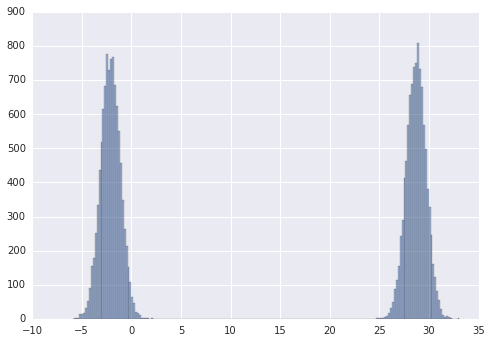 4
How to estimate the parameters of a Gaussian distribution sample with outliers?
2
Output of a System with a White Gaussian Process as an Input
4
Claim that a distribution is almost Gaussian
2
Sum of random variables without normalization approaches gaussian
3
Generative autoencoders - how important is agreement of latent variable distribution e.g. with Gaussian?
3
Optimizing forward/reverse KL divergence for Gaussian distributions