Type I error and type II error trade off

Can someone illustrate the trade off with the help of a diagram and intuitive explanation? Thanks

hypothesis-testing statistical-significance
Share
Improve this question
asked May 10, 2016 at 1:40

You can think of using how scared the boy as a kind of test statistic. If he's crying, his breathing and heart rate are elevated, he has goose bumps or piloerection (his hair is standing up), then the villagers should take his claim more seriously. Requiring all these symptoms to be present and high is analogous to using a small $\alpha$ in the graph that @slowloris posted.

A life and death example of statistical errors

You are a paramedic and you approach the scene of a car accident. One victim is laying motionless on the road and you must assess whether the victim is dead or alive, and the victim will be treated accordingly. Based on this information which error rate results in the most costly mistake?

Therefore, you may consider the trade-off of these errors. In traditional statistical hypothesis testing, you could use this cost benefit analysis to determine your alpha (Type I error rate) and beta (Type II error rate) before conducting an experiment. In our example, we would want a very small alpha (typically 0.05), but could live with a larger beta (typically 0.1 - 0.3, but we could live with >0.3 in this case). This would, for example, dramatically effect the required sample size of your experiment because you are OK with accepting the null hypothesis incorrectly and report that dead people are actually alive.

I diagnostic testing, we can look at trade off of Type I and Type II errors in terms of the threshold we place between the distribution of a measurement taken from two populations. Using our example, we might measure the redness of the skin, with redder skin representing a living victim.

In the figure, we can see that the best place to put a threshold between these groups is in the lowest point between the two distributions. This location would result in the least overall error. However, we can make a logical trade off here: By moving the threshold to the Right, the probability of a Type I error is reduced at the expense of increasing the probability of a Type II error. In our example, this trade off is good and would likely save someone's live and our job as a paramedic.

Google "illustration type 1 type 2 error" and have your pick. This site is one of many you can find a figure like the one you are asking for. 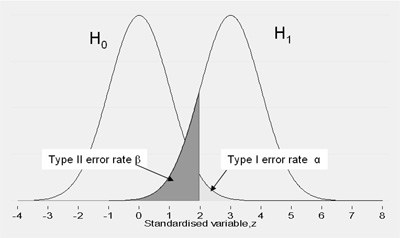 Not the answer you're looking for? Browse other questions tagged hypothesis-testing statistical-significance or ask your own question.

2
Why a false positive is called type I error and a flase negative a type II error?
1
interdependence of type 1 error and type 2 error in p-Value based hypothesis tests
0
Type 2 error graphical representations

8
Why must one trade off between bias and variance?
5
How to simulate type I error and type II error
1
Why is there an intrinsic trade off between the probability of detection and probability of a false alarm in the operating characteristic?
2
Type 2 error meaning
4
Significance versus the bias-variance trade off
1
Type 1 and Type 2 errors trade-off
1
Trade-off among statistical tests