Let's say I want to perform an AB-Test with the following properties:

The question now is: How to define the percentage of all trials / unique visitors which should be assigned to the control group A so that ...

you mean that you want to keep the so called Type I-error, i.e. rejecting the Null-Hypothesis although it is true, as small as possible. This can be simply achieved by setting $\alpha$ of the statistical test to the minimum accepted error probability (> 0).

However, this is not enough. What you actually want to do is to control both type of errors, or otherwise you won't detect a difference although it exists. In general, one calculates the required sample size given a minimum difference to detect (controlling the Type II-error, i.e. not rejecting the Null-Hypothesis although it is false) and a maximum accept $\alpha$ and $\beta$. $\beta$ is also called the "power" of a statistical test, hence another keyword to look for is "power analysis" or "power calculation".

Every basic textbook about statistics should contain a chapter about that. Regarding application I suggest to use the r-package "pwr" which already provides implementations for the most common cases.

Example: Assuming that the distribution of A and B is both approximately normal distributed and that the variances are known to be equal, this method pwr.t2n.test will help.

results in the following plot, which not surprisingly shows that the best split is at 0.5. 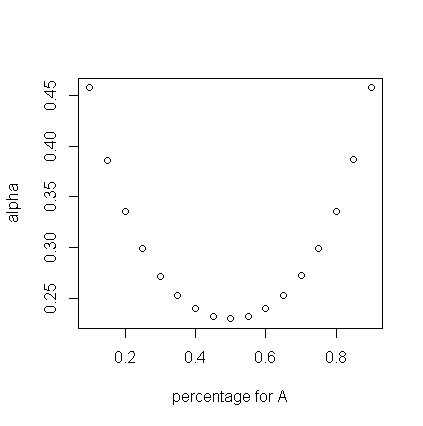 I know that keeping control groups is often expensive. Either the control group gets more data at once (equal split) or the test lasts longer. In the latter case, the control group will require a lesser amount of data overall, just because the confidenceinterval of B has shrunk more.

Note: I admit, I do not know whether there is a formula for calculating the required sample size where

If you require that, you may ask specifically for it in a seperate question. My knowledge ends here.

Not the answer you're looking for? Browse other questions tagged statistical-significance ab-test group-differences or ask your own question.

3
How to determine statistical validity of results
1
How can I compare whether classifiers outcome is significantly different?
7
Calculating significance and uplift on Revenue A/B Tests
11
A/B testing ratio of sums
1
How to test if a single proportion is significantly different from zero
0
Test if population sizes are statistically different?
1
Proper test for between-group percentage difference and for individual response differences?