Why the focus on variance reduction for $R^2$?

It seems to odd to me that we measure the explanatory power of a regression model in "percent of variance explained", or $R^2 = {\rm cor}(\hat{y},y)^2 = r^2$ even though we all know that variance is just an auxiliary quantity to compute the more meaningful measure of uncertainty which is the standard deviation. Risk in finance or uncertainty in prediction is measured by $\sigma$, not by $\sigma^2$. Knowing the reduction in variance in a regression model seems much less useful than the reduction in standard deviation.

In fact, whenever I try to explain $R^2$ to my students, I usually start by comparing the overall variation of y (as measured by $\sigma_y$) to the remaining variation around the regression line (measured by $\sigma_{\epsilon}$). That idea is adapted much more naturally than the comparison of the variances which really have no direct interpretation!

Comparing the traditional $r^2$ with the new measure $1-\sqrt{1-r^2}$ reveals that substantially stronger correlations $cor(\hat{y},y)$ are needed to result in similar "uncertainty reduction". For example, what one used to call a high value of $R^2 = 0.8$ explaining 80% of the variance, would have reduced the true uncertainty by merely 55%!

The graph below shows the stronger convexity of this alternative measure. 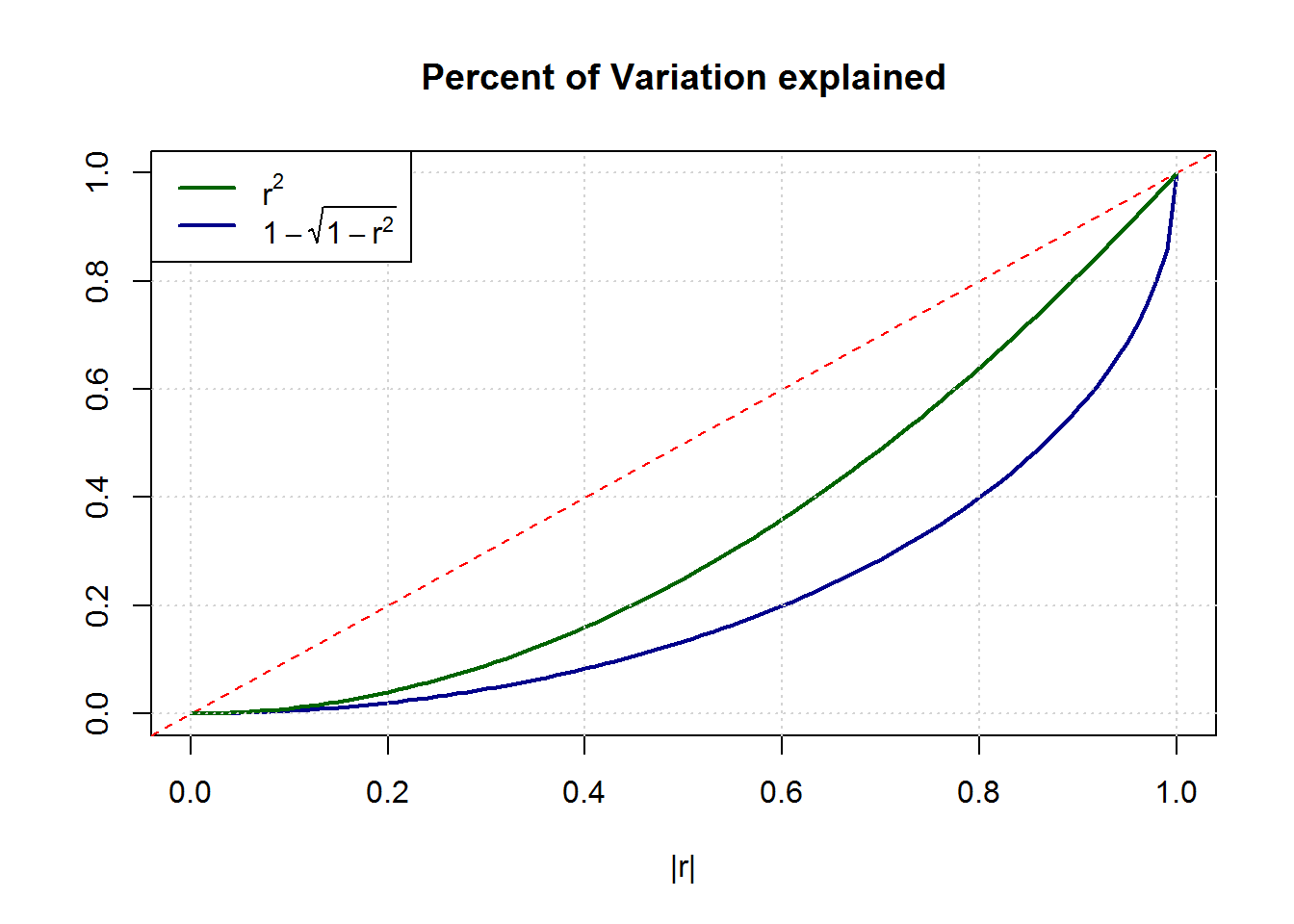 My question is twofold

There is nothing inherently wrong with measuring goodness-of-fit in a regression model with other monotonic transforms of the coefficient of determination, and indeed, there are several natural transformations that have useful interpretations. Before getting to these, it is useful to note the desirable mathematical properties of the coefficient of determination, and how it arises. The best way to understand this is to look an linear regression from a geometric perspective, where we consider the response and explanatory variables as vectors in Euclidean space.

Geometric analysis of the linear regression: Using OLS estimation in linear regression, the response vector is projected onto the column-space of the design matrix, which yields a predicted response vector in that column-space, and a residual vector that is perpendicular to that column-space (i.e., in the null space of the design matrix). This gives the regression equation $(\mathbf{y} - \bar{\mathbf{y}}) = (\hat{\mathbf{y}} - \bar{\mathbf{y}}) + \mathbf{r}$ which decomposes the response deviation into a predicted deviation and a residual. Since the residual vector and the predicted response vector are orthogonal under OLS estimation, this gives you a triangle of vectors that obey Pythagoras theorem, giving the decomposition:

Geometric explanations of linear regression commonly show the triangle of vectors in the above decomposition, and note the resulting decomposition of the squared-norms of these vectors (i.e., the sums-of-squares). One natural way to look at the goodness-of-fit of the linear regression model is to look at the shape of this triangular decomposition --- the smaller the residual vector (relative to the other vectors), the narrower the triangle and the better the fit of the model to the data.

Some useful measures of goodness-of-fit: There are several useful ways of looking at the goodness-of-fit, via the above decomposition of vectors (and the resulting decomposition of their squared-norms). Most of these involve using a measure that is some monotonic transformation of the coefficient of determination, and so they all measure the same thing, but in a different way. Here are some useful measures of the goodness-of-fit that are monotonic functions of the coefficient-of-determination:

As you can see, there are several monotonic variations on the coefficient-of-determination that can be used as measures of goodness-of-fit. These have different interpretations that are all quite useful in certain contexts. The statistic you propose is somewhat similar to the explained standard deviation statistic above, but it fails to adjust properly for the degrees-of-freedom in the regression, so its interpretation would be a bit more difficult. Nevertheless, it is a monotonic function of the coefficient-of-determination, so it can be used as a measure of goodness-of-fit.

Particularly for a class for non-majors, it's probably fine. Most likely your students think of standard deviation whenever you mention variance, anyway.

It also makes sense to me. The goal of regression is to reduce the variability. Sure, the variability of human height is quite large, but when you account for age and gender, the distribution narrows, and you have a better idea of how tall a 30-year-old woman is ("around 5'5" ish") than how tall a human is in general.

1) Variance is a natural way of thinking about the spread of data, since it's the second central moment of a distribution. There's also a good estimator that is unbiased for every distribution with a defined variance. Taking the square root of that (amazingly) results in a biased estimate of standard deviation.

Not the answer you're looking for? Browse other questions tagged regression interpretation r-squared or ask your own question.