How to compute asymptotic confidence intervals for differences in quantiles?

Can anyone give me advice on computing the asymptotic confidence intervals for a difference in quantiles of a distribution? For example, I have fit a log-normal distribution to doubly interval censored data with a maximum likelihood estimator and want to make statements about a percentage of the probability mass falling outside two fixed values (i.e. 23% (XX-YY) of values in this distribution fall outside of the range 1-2).

I can get SEs for the median ($e^{\mu}$), dispersion ($e^s$), and quantiles ($e^{\mu+sq}$) using the delta method but for some reason can't think of how to get SEs for differences between them. To get the SEs for the quantiles and params above I use the following:

It doesn't sound like you want the difference in quantiles: the parameter you describe is the probability of the interval $[1,2]$. More generally, you can specify any interval endpoints $[x_-, x_+]$ in advance. Given parameters $(\mu, \sigma)$ of the distribution with CDF $F_{(\mu, \sigma)}$, this probability would be written

As such it's just a (nice, differentiable) function of the parameters and can be addressed--at least conceptually--as would any other such function. 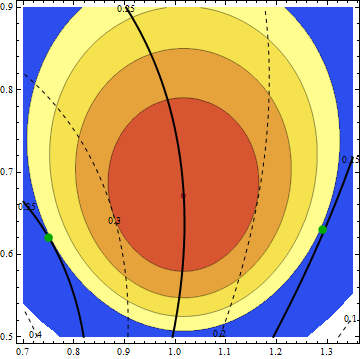 The ML estimates are the coordinates of the dot in the middle where $2 \Lambda$ is largest, because the likelihood is maximized exactly when twice its logarithm is maximized. Shaded areas show contours of $2\Lambda(\mu,\sigma)$ in the $(\mu,\sigma)$ plane in intervals of $3.841/4$, so that the region of interest (by descending values of $2\Lambda$) is comprised of the red, orange, yellow, and light yellow areas, terminated by the beginning of the blue area. 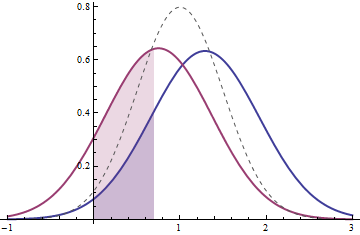 In summary, I have described a constrained optimization problem: to find the confidence limits of $\theta$, minimize and maximize $\theta$ within the region $2 \Lambda(\mu,\sigma) \ge 2 \Lambda_0 - c$. When the log likelihood is expensive to compute, this problem can be computationally expensive to solve, but at least it is straightforward.

Not the answer you're looking for? Browse other questions tagged confidence-interval quantiles asymptotics delta-method or ask your own question.